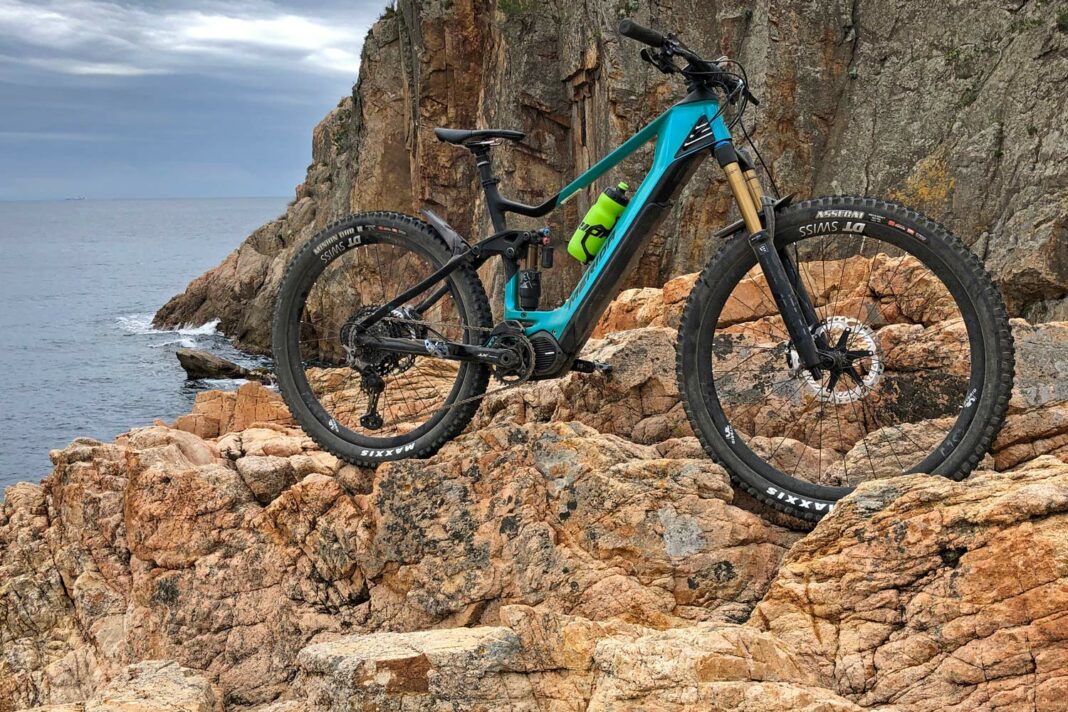 The latest Merida eOne-Sixty eMTB builds on the success of its predecessor to take e-enduro performance one step higher, with a new carbon frame, an all-new and more compact Shimano internal battery, and a reboot of the 69er mixing the benefits of both 27.5 & 29″ wheels. As we saw with the Pivot Shuttle, this new eOne-Sixty really STePS up the performance of Merida’s 160mm e-bike, evolving into a more capable riding and e-racing bike. 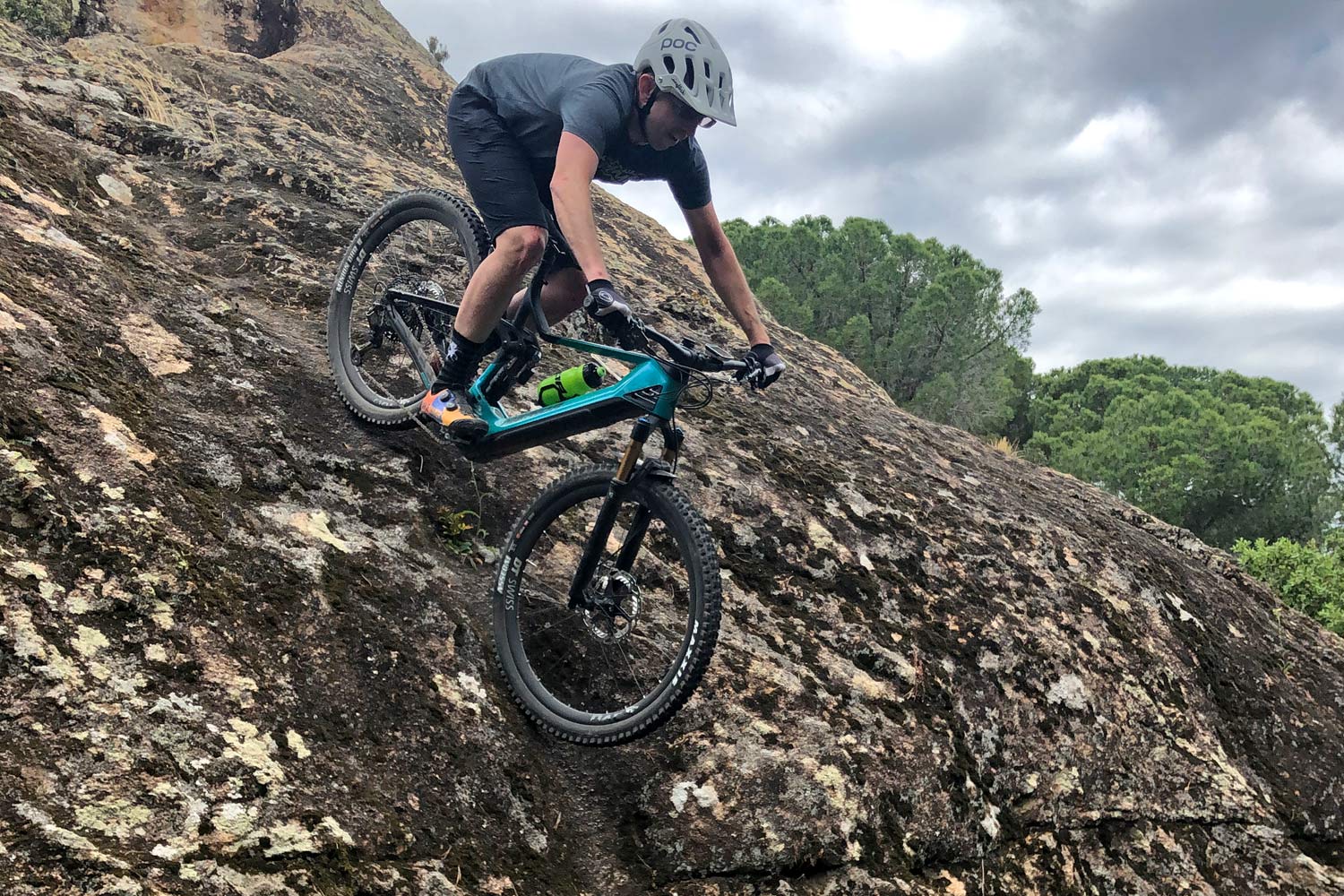 Introduced three years ago Merida’s original eOne-Sixty enduro e-bike became the brand most well-received bike in their history, blending affordable, high-value eMTB performance with a balanced feel that was just fun to ride. 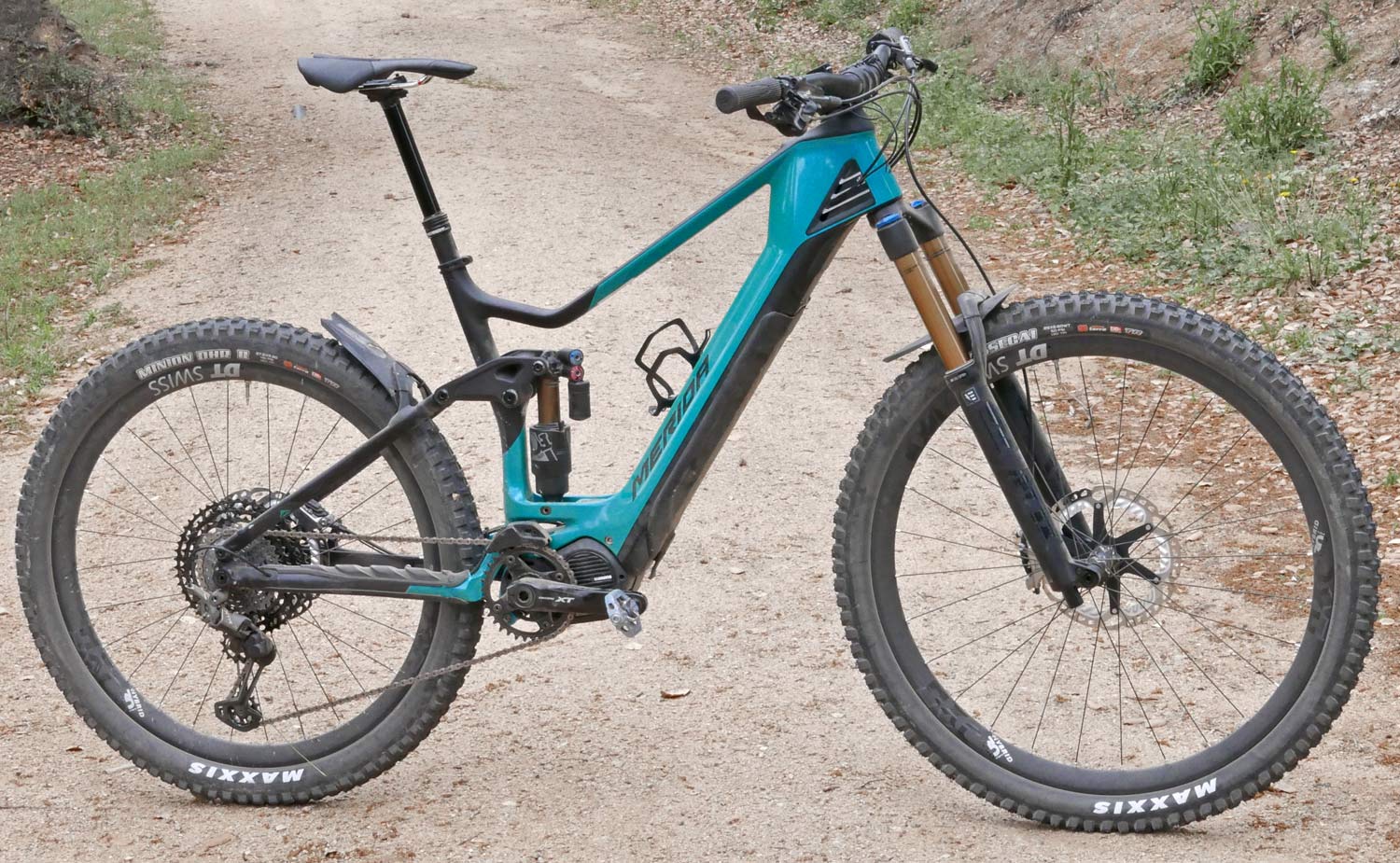 Now it was time for some technical evolution, getting a more streamlined carbon frame with a lower center of gravity thanks to a new, co-developed Shimano internal battery, carefully tweaked geometry, and a bigger front wheel to roll over anything in its path. 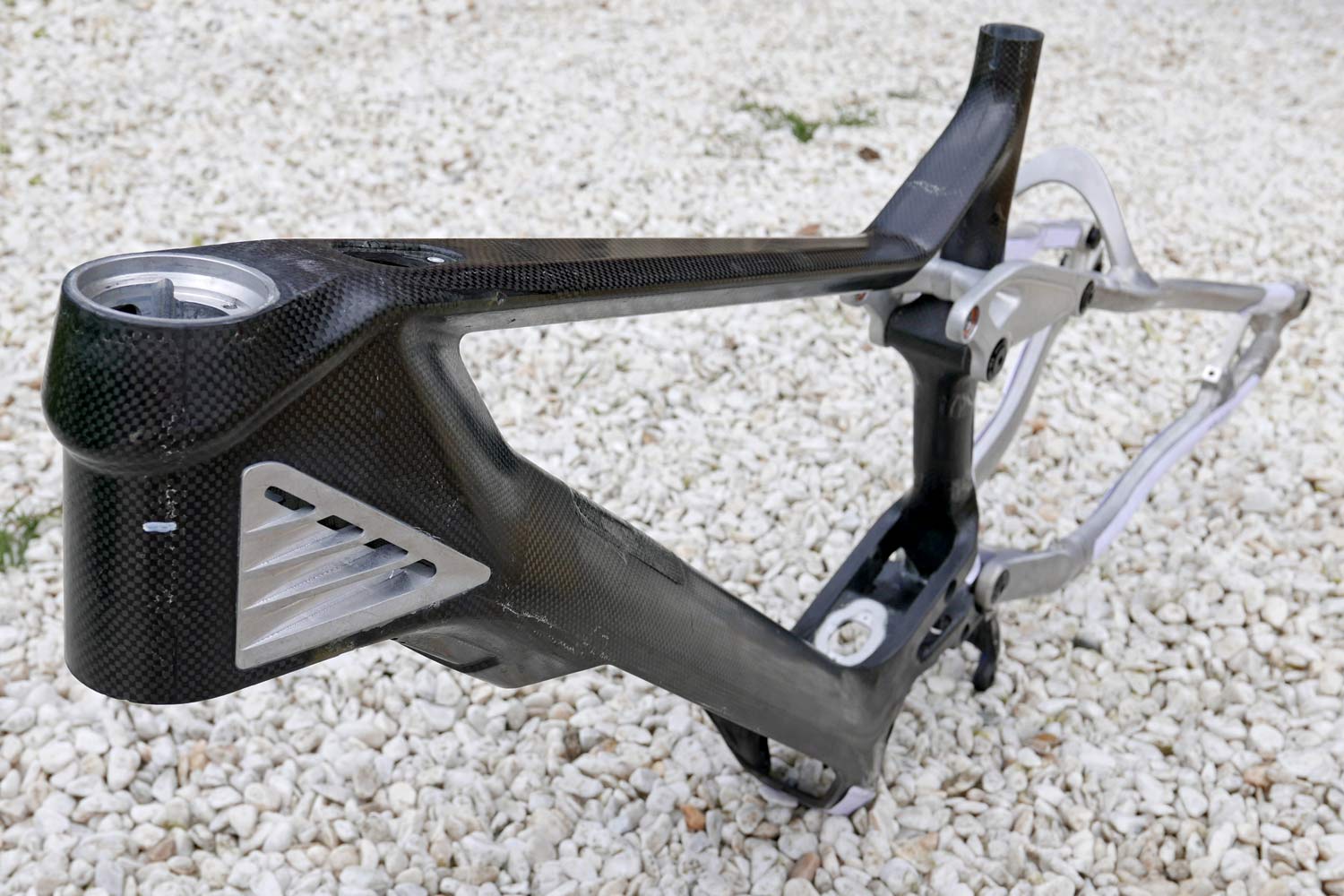 The heart of the update is a new carbon front triangle. Carbon allowed them to open up the large hole in the bottom of the downtube for the battery, while actually improving stiffness a bit. But of course, carbon doesn’t help dissipate heat, thus the big alloy vents in the headtube. (More on that in a second…)

Merida kept the alloy rear triangle of the standard eOne-Sixty unchanged. The engineering team essentially said, ‘if it ain’t broke, don’t fix it.’ The performance of the rear end has been proven over the last few years, and reworking the main triangle gave Merida all the room they needed for their upgrades. 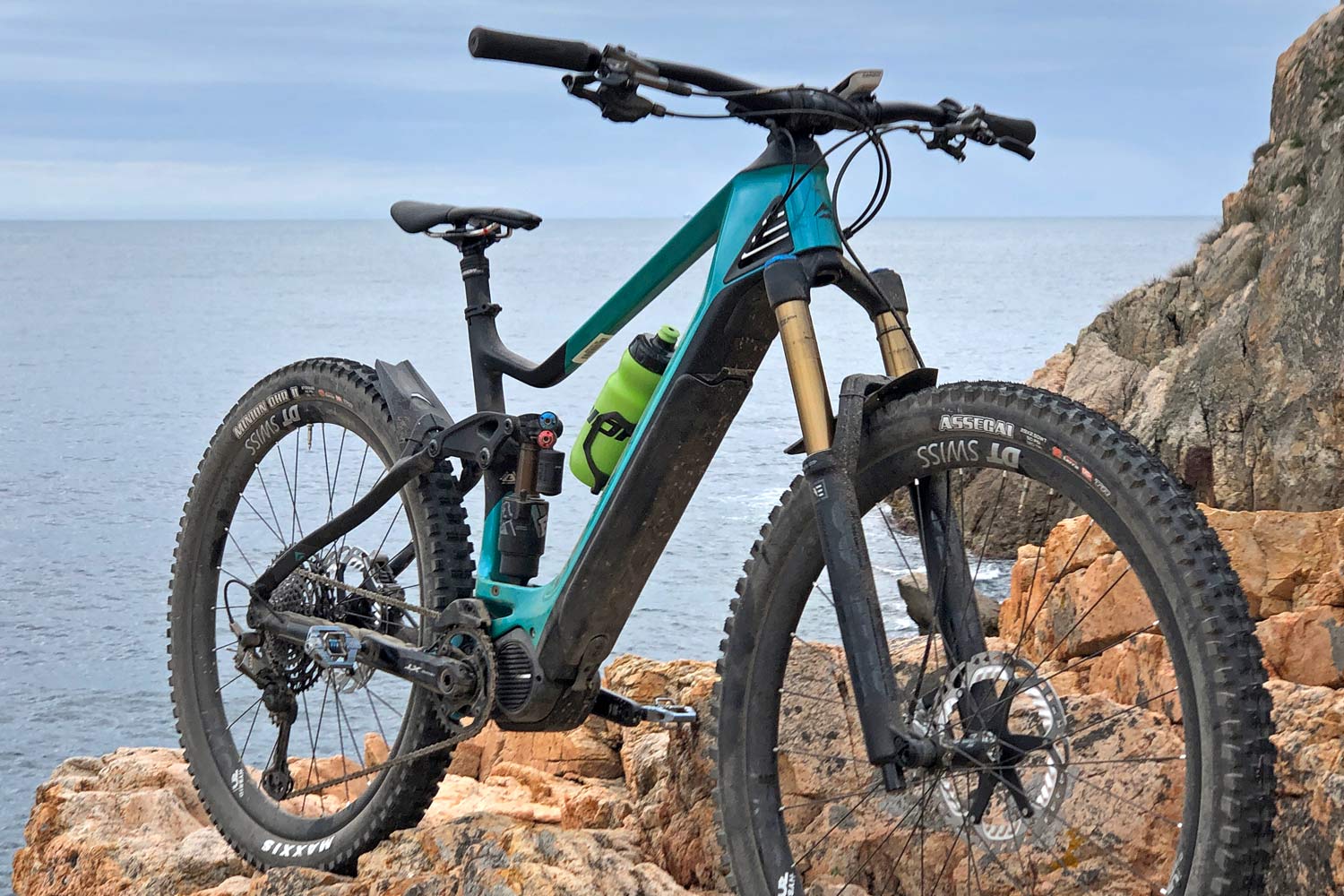 Now hidden behind the black underside of the downtube is a large opening to make it quick & easy to get at the new Shimano battery pack. But more than just going internal for integration’s sake, the new design better protects the battery, lowers the weight in the frame by a noticeable amount, and makes room for a full size water bottle inside the main triangle of every frame. (This bike I test rode was a size L, and there was room for an even larger bottle if I wanted, thanks to a side-loading cage.) 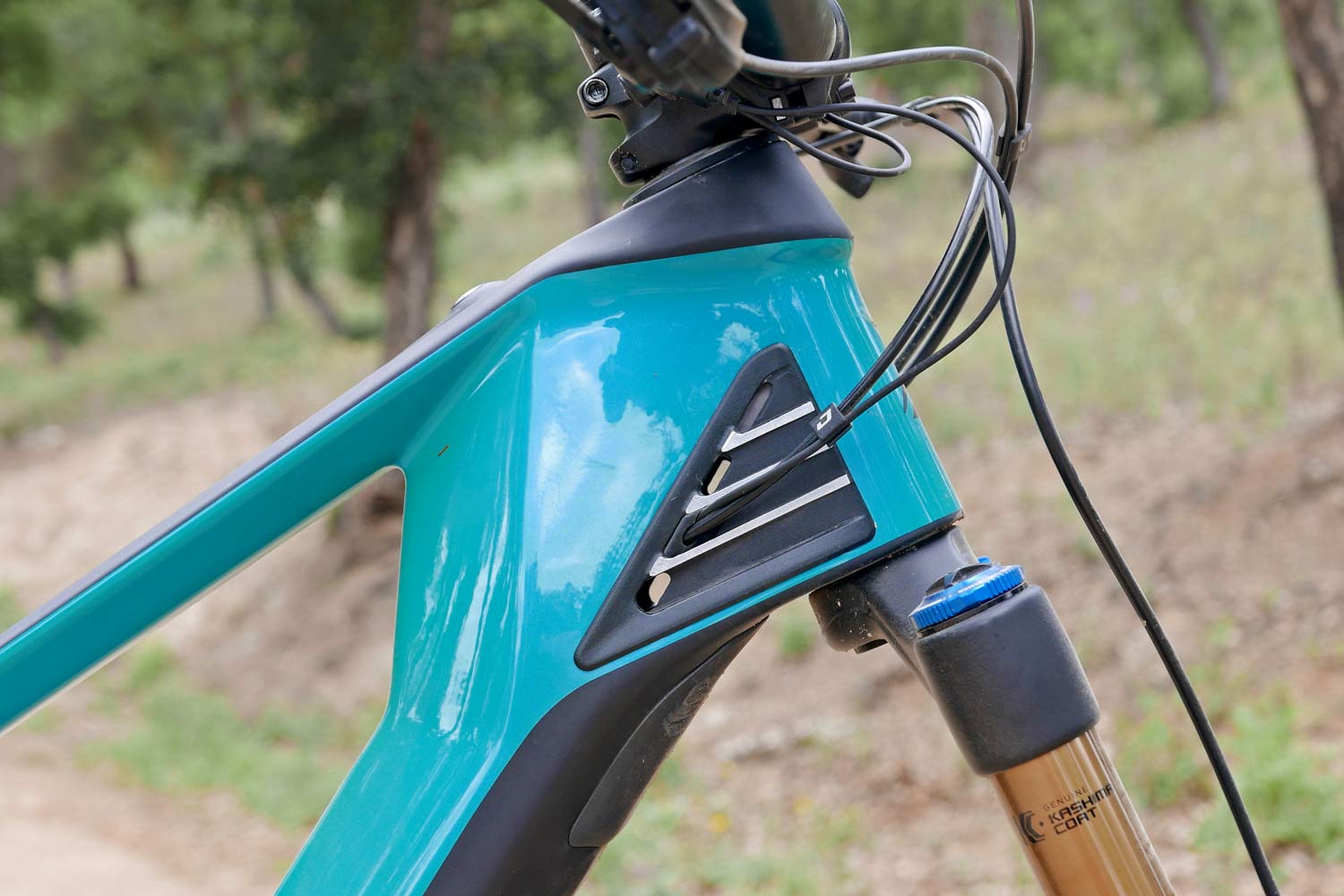 Looking back to that headtube vent, Merida calls it the Thermo Gate, and is more a chimney than a forced air vent. (See how you can see straight though it?) Since carbon doesn’t transfer heat, the opening allows excess heat to escape from the internal battery inside the downtube. These opening promise to allow excess heat from the aluminum case of the internal battery to rise up & out, whether from the bike sitting in direct sun when not riding or during low-speed, high-output climbing – both times when forcing air in through some scoops wouldn’t really aid cooling anyway.

Inside that headtube is an internal headset steerer stop modified from the same setup Merida debuted years back on their XC bikes. Effectively it allowed for a more straight downtube shape, and is combined with a rubber stop on the frame itself to prevent the fork crown from striking the carbon. 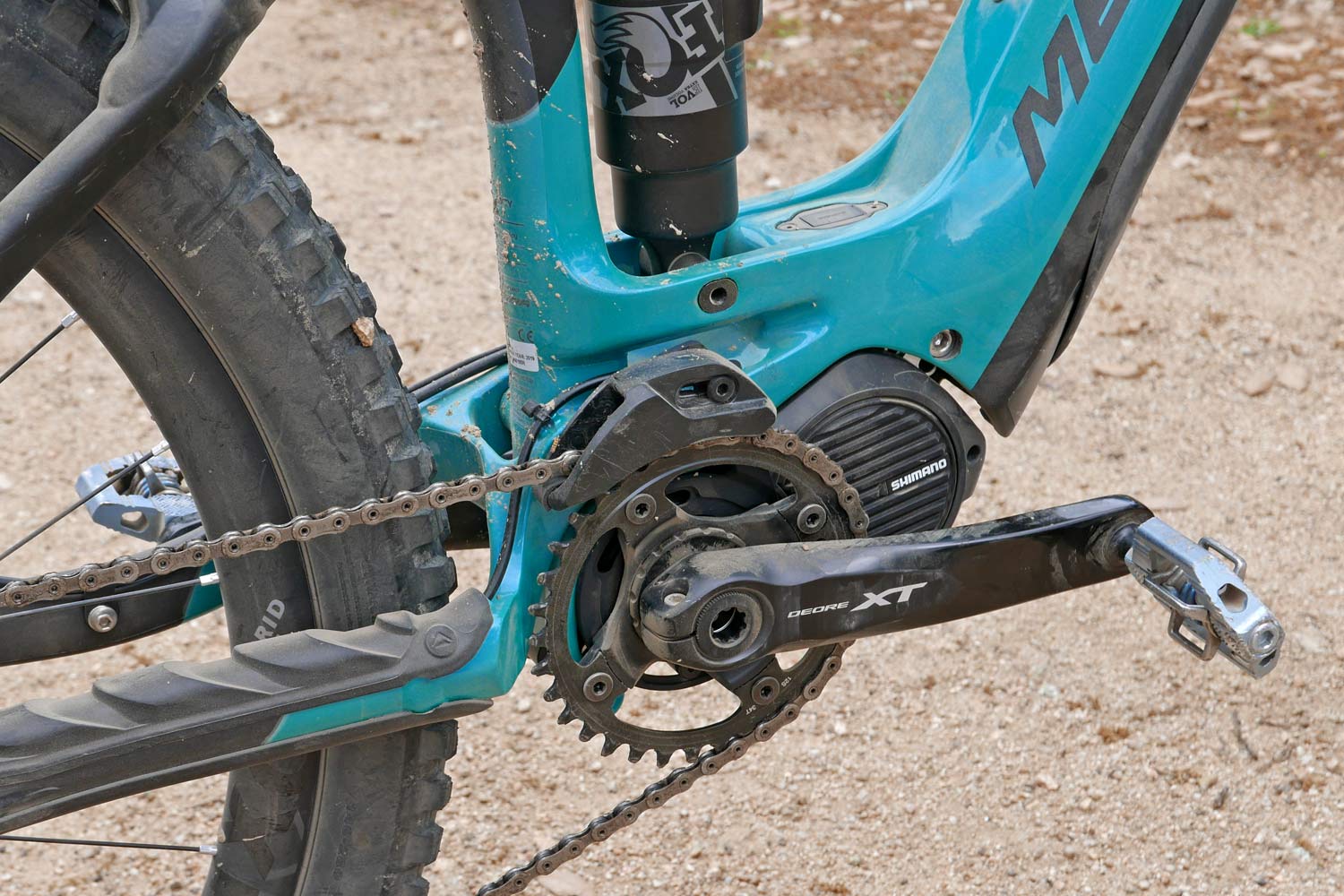 Obviously the integrated battery in the downtube is a big design feature, but from a technical perspective, the proven performance of the Shimano STePS e8000 powertrain is hard to argue with. Merida says that with the carbon main frame, they were able to even tuck the motor bracket more neatly into the rear shock mount for short stays. 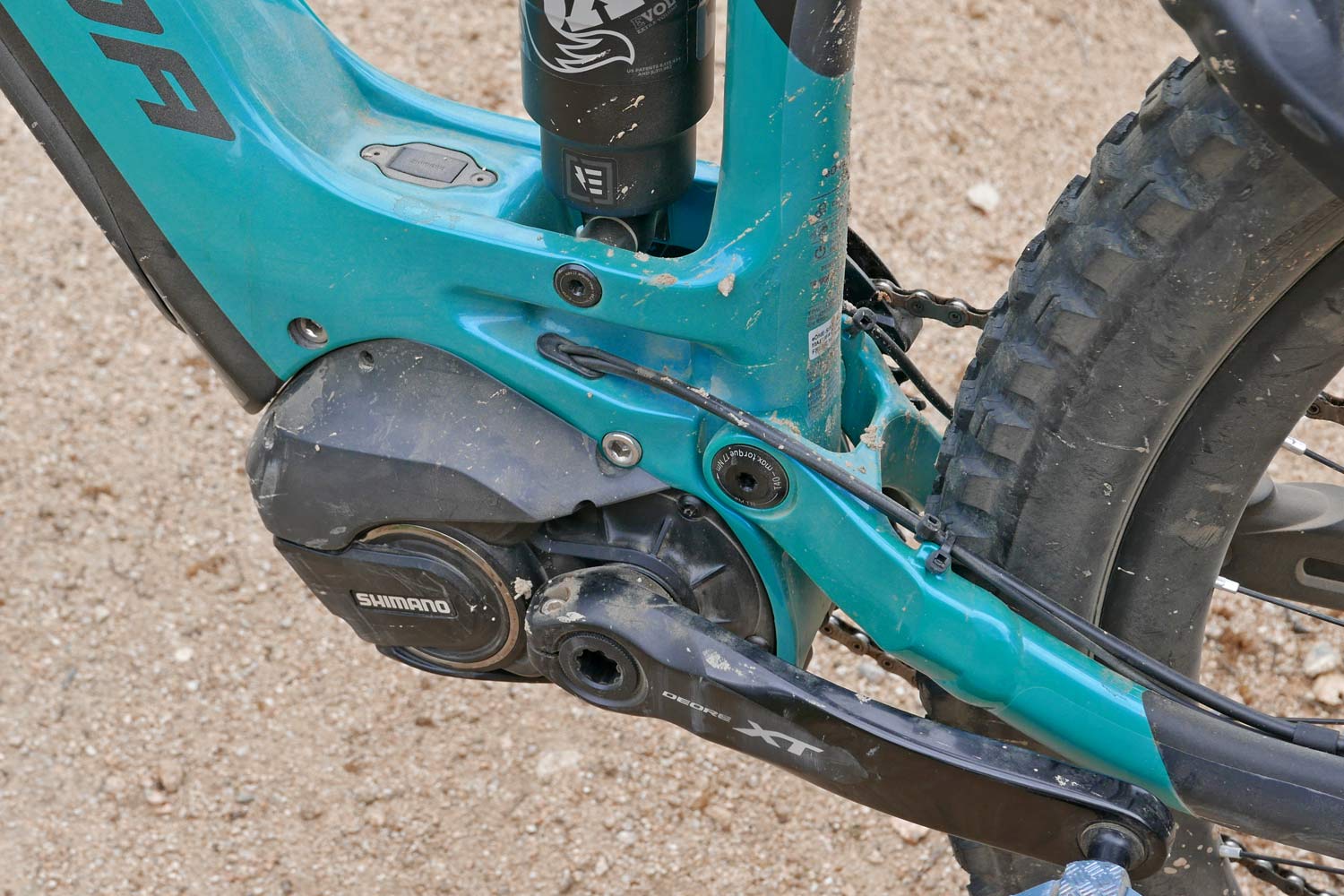 Merida is a staunch supporter of the idea that Shimano delivers both a better e-bike powertrain product, and better service through their omnipresence in bike shops & service centers around the world. If you ever have an issue with your super expensive eMTB, it’s reassuring that Shimano is never very far away.

One important note when I get back to talking geometry, Merida made a small change of designing for 165mm cranks across all bike sizes now (vs. 170s on the alloy eOne-Sixty). That let them drop the BB without increasing pedal strikes, further lowering the mass of this bike for more stable riding. 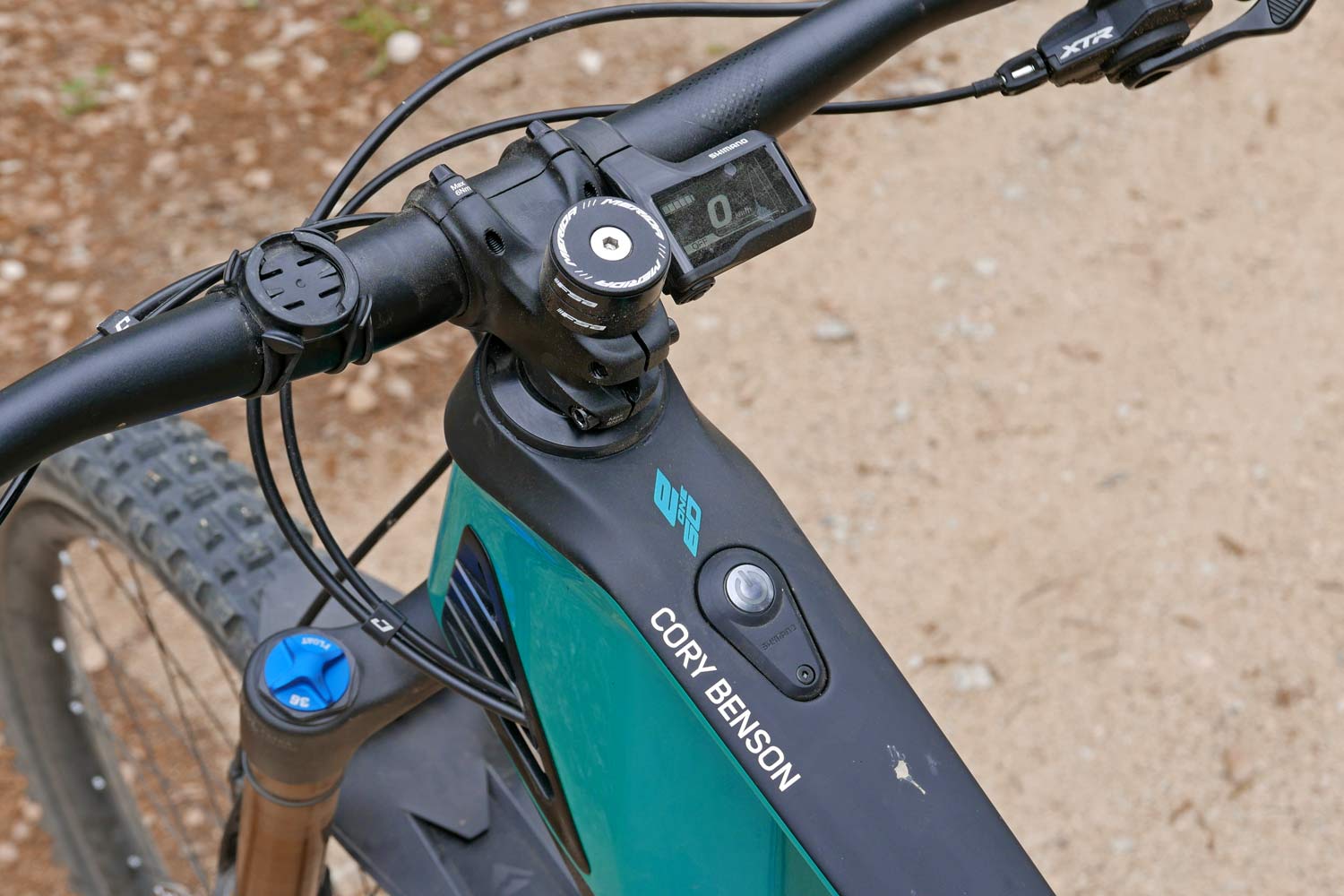 The new eMTB mixes a bit of Shimano’s latest STePS control elements. The newer push-to-start button & the charging port located just above the BB were both upgrade control items, introduced with e7000. But then the bike uses the older, but higher-resolution color e8000 display. (See that tiny stem? That’s a 40mm, paired with 35mm diameter bars across all frame sizes.) 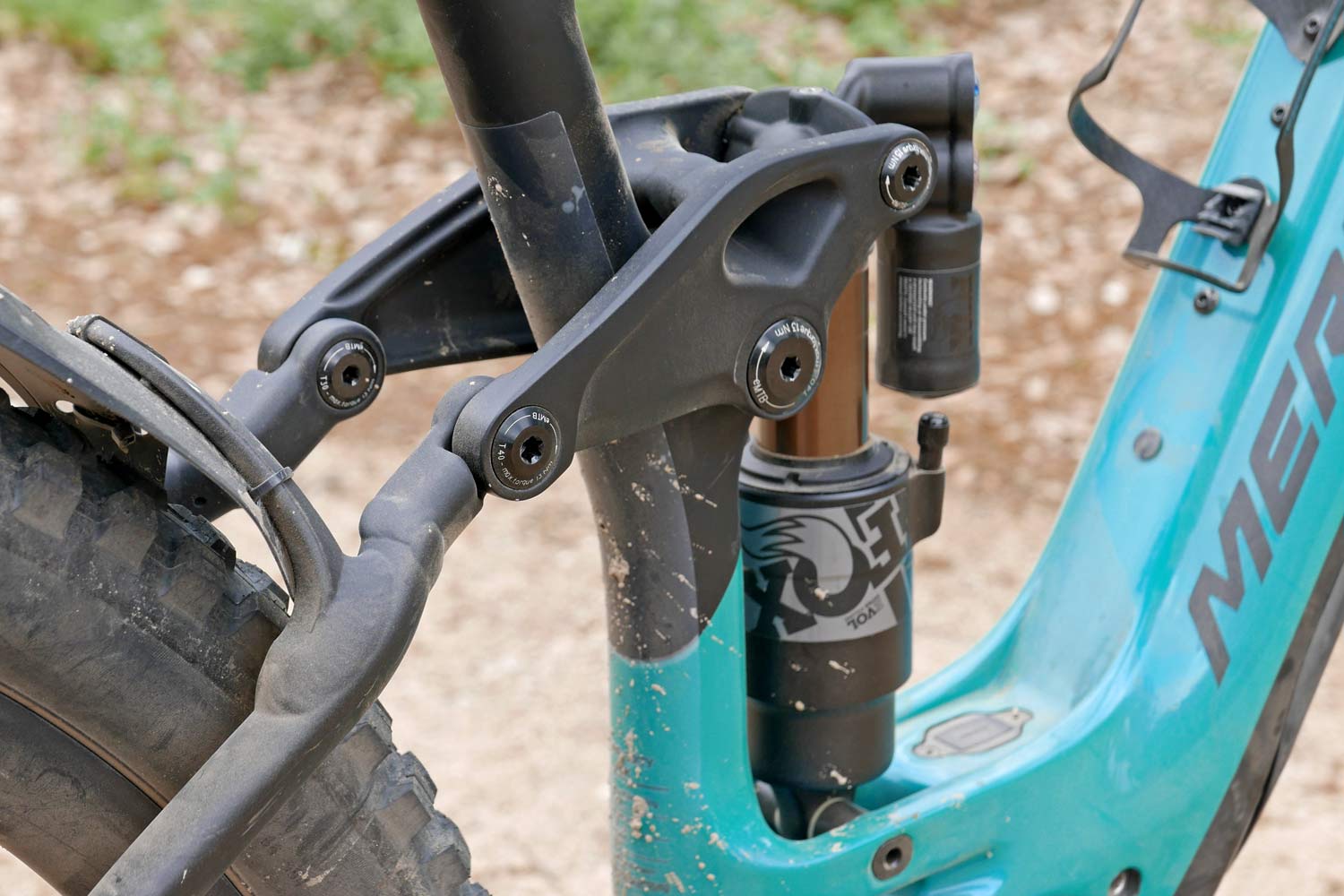 The suspension design is again unchanged from the alloy eOne-Sixty (remember the rear is the same anyway.) You get 160mm of rear wheel travel (paired to 160mm forks) via a faux-bar linkage-driven single pivot with an alloy rocker arm and a trunnion mount shock. 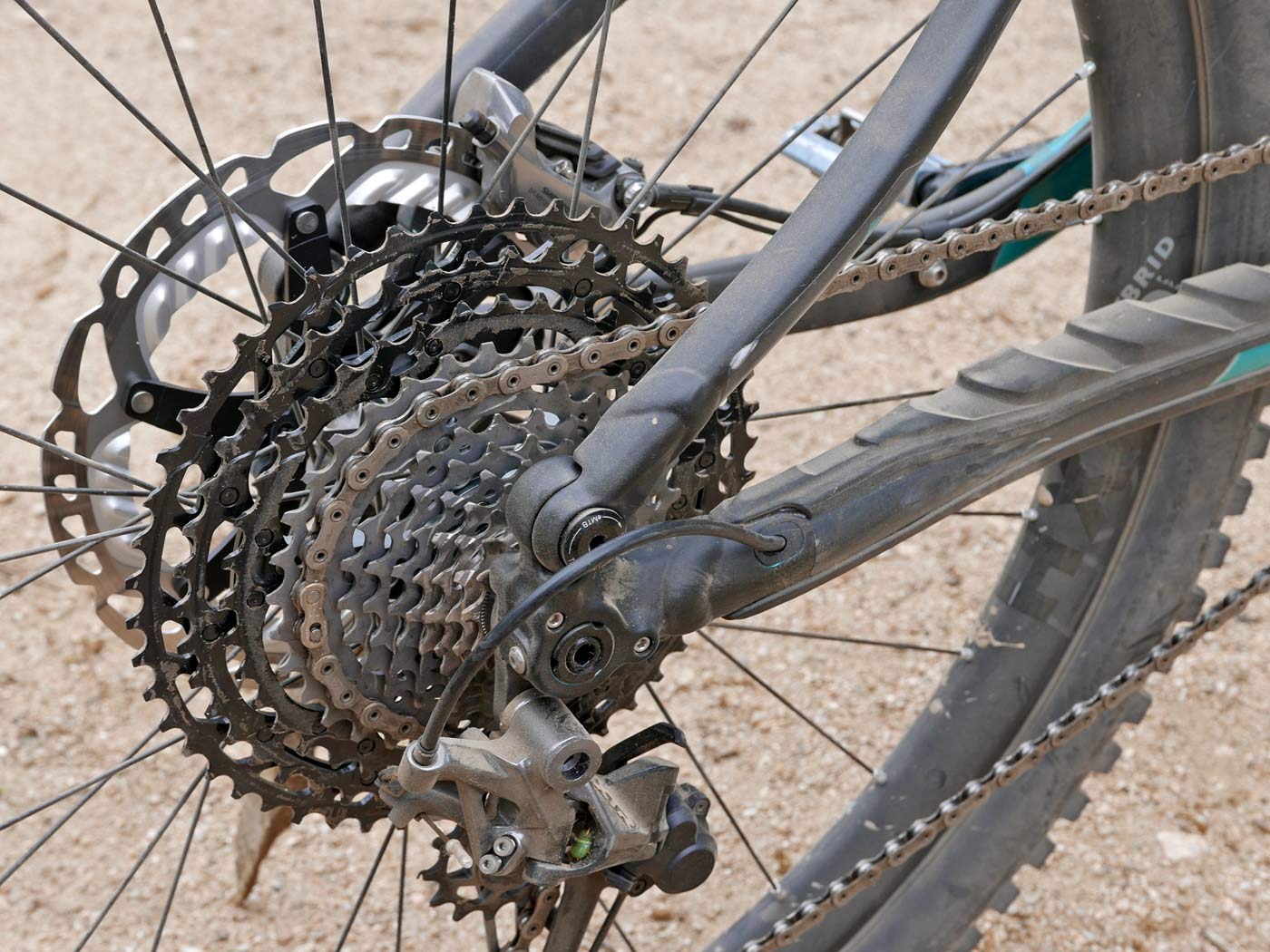 The alloy rear end gets a Boost spaced thru-axle, and this model features a Shimano XTR 1×12 mechanical shift drivetrain. Cable routing is mostly internal, and the alloy rear gets a new massive ‘dragon-scale’ rubberized chainstay protector to silence chain slap. 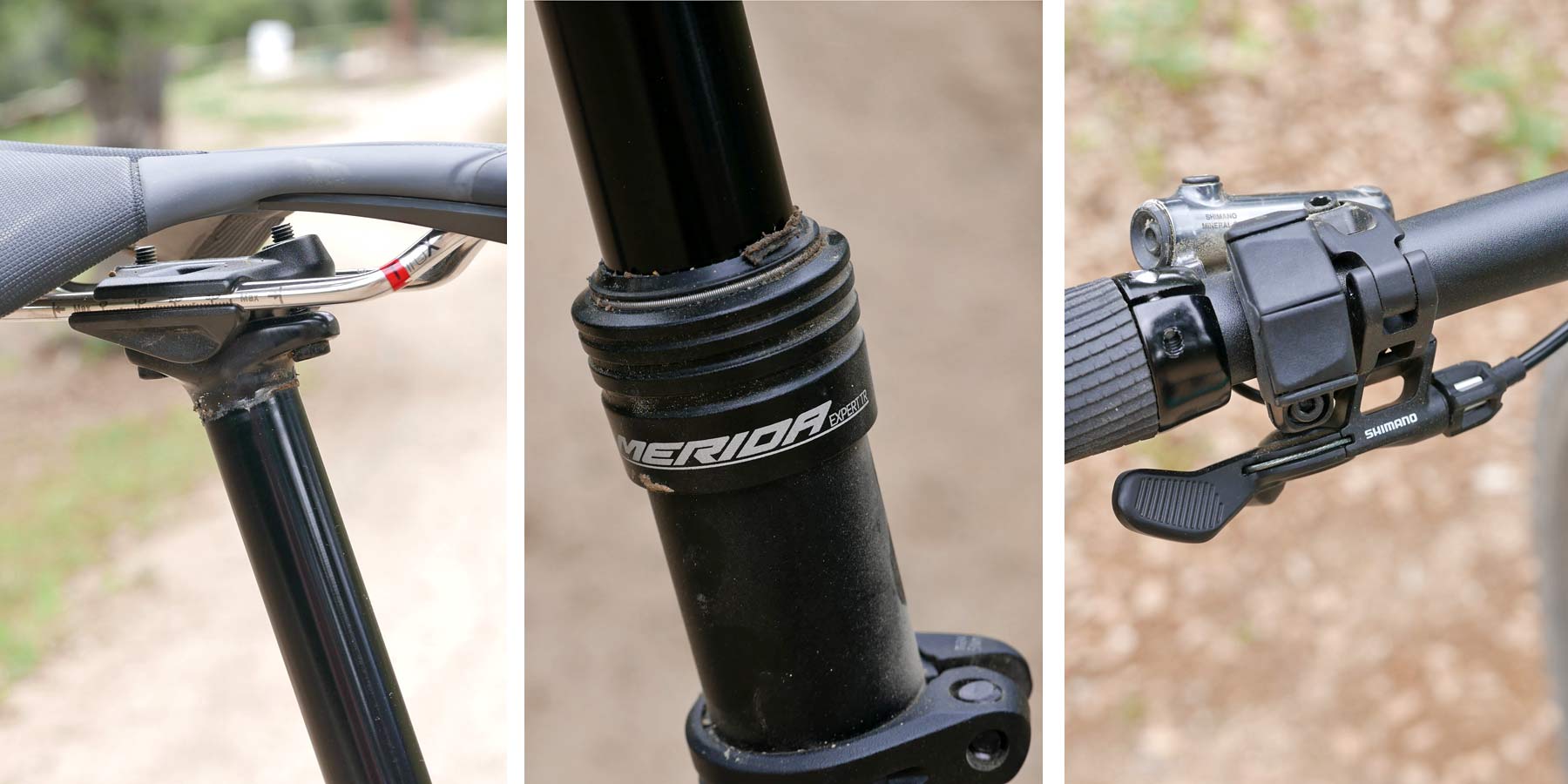 A new bit of component tech, Merida adds their own 30.9mm Expert TR dropper post that promises short minimum insertions to fit within the relatively short seattubes. The post comes in three travel lengths 170mm for L&XL, 150mm for M & 125mm for S sizes. It isn’t yet available separately, but Merida suggested it should be in the near future, and uses the new Shimano dropper remote for simplicity & a clean cockpit setup. 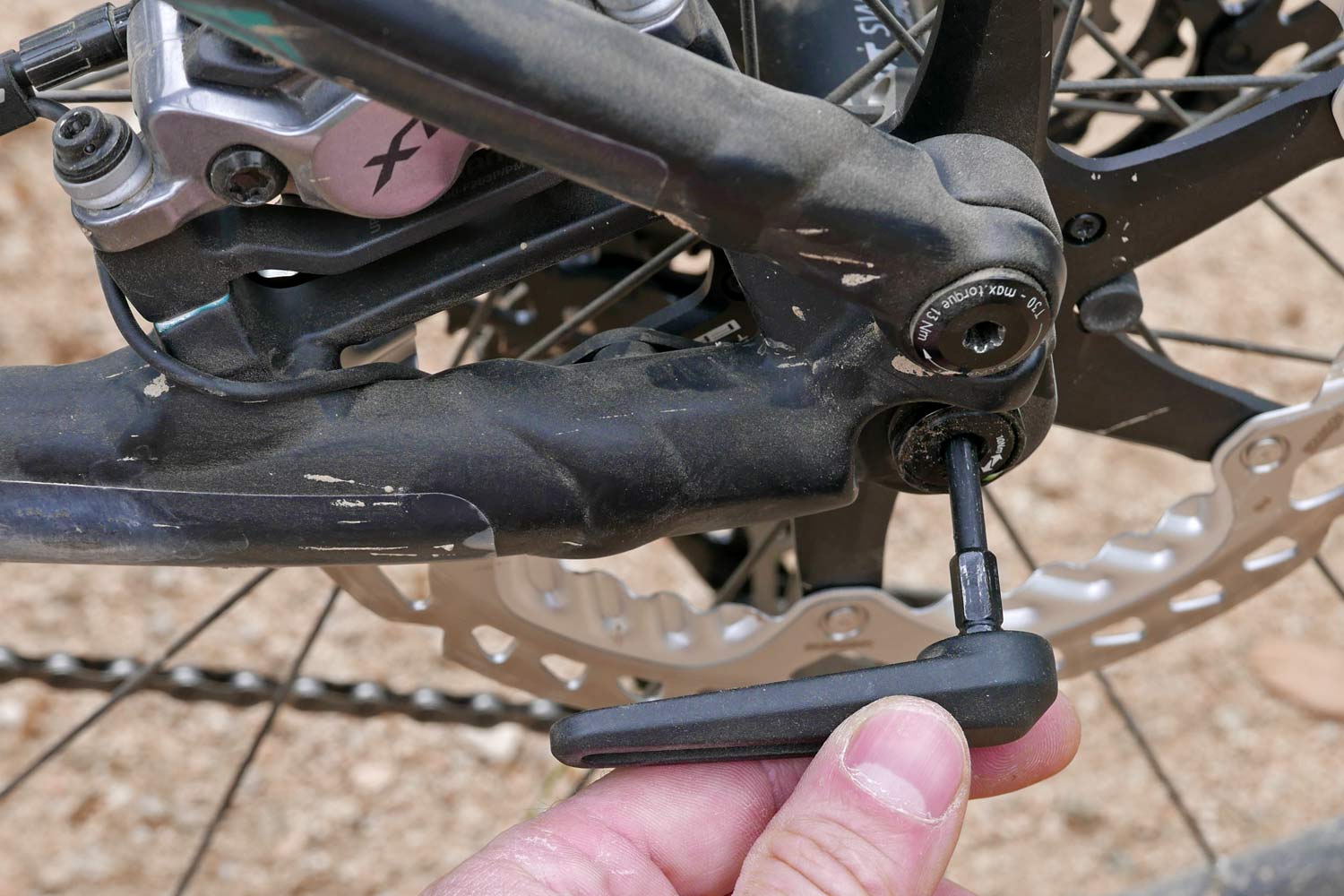 More nice little details, the rear thru-axle gets a removable QR lever incorporating both a short 6mm for tightening axles, and a longer 4mm hex for pretty much every other bolt on the bike. 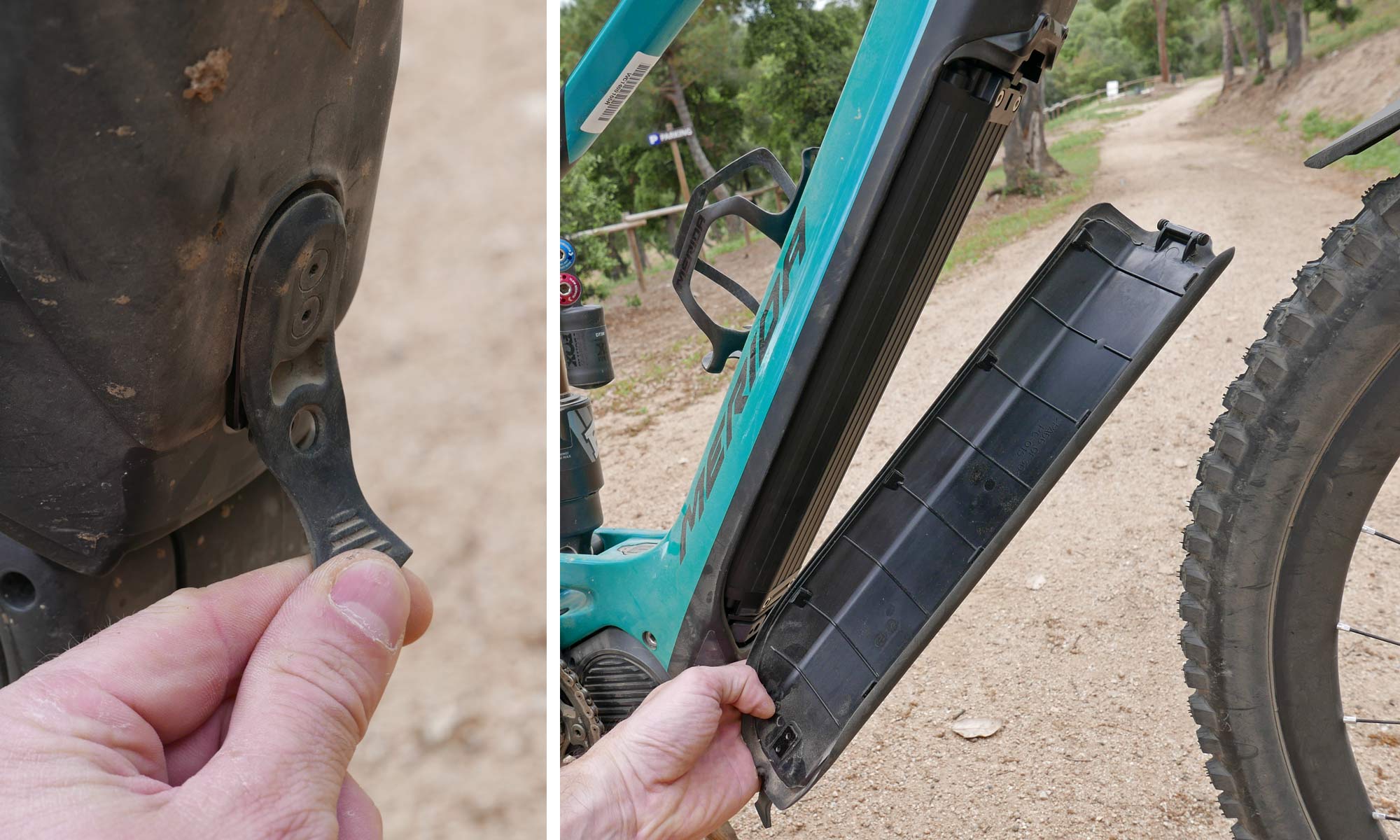 The internal downtube battery is protected by the Energy Guard, dual-material rock guard, designed to both protect and keep the bike riding quietly.

To remove it a simple pull on a little rubber tab at the bottom, then slide the whole thing up to reveal the new 504Wh internal battery inside… 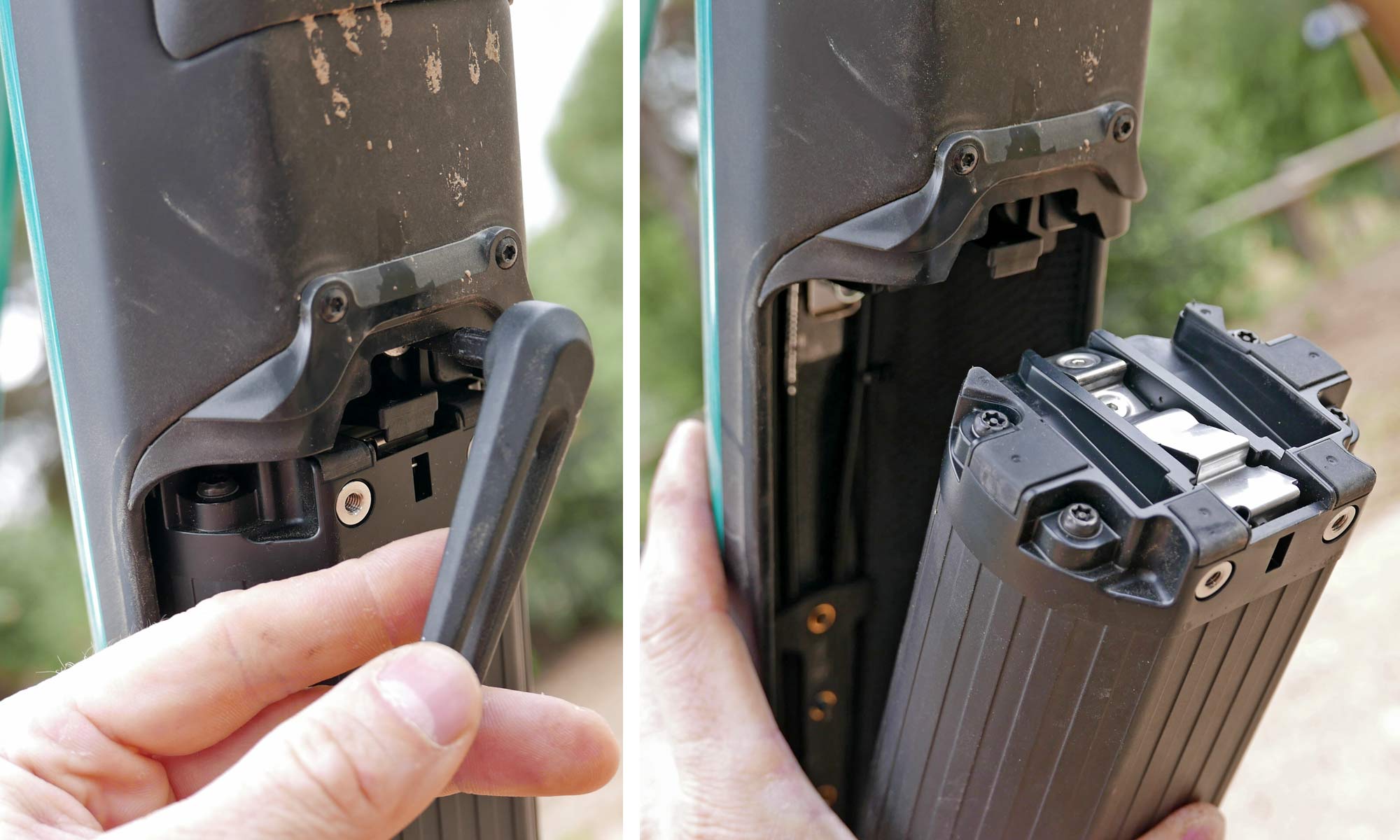 The cover is there just for protection, though. Removing the battery is another two-step process that takes just a few seconds. You need a 4mm to release the battery latch which ensures it stays in place over rough terrain. (Remember that rear QR lever comes in handy!)

Then, the battery is held in place by the little metal clip (and doesn’t just drop totally out). Press that and the battery is easily removed for swapping or to charge away from the bike. 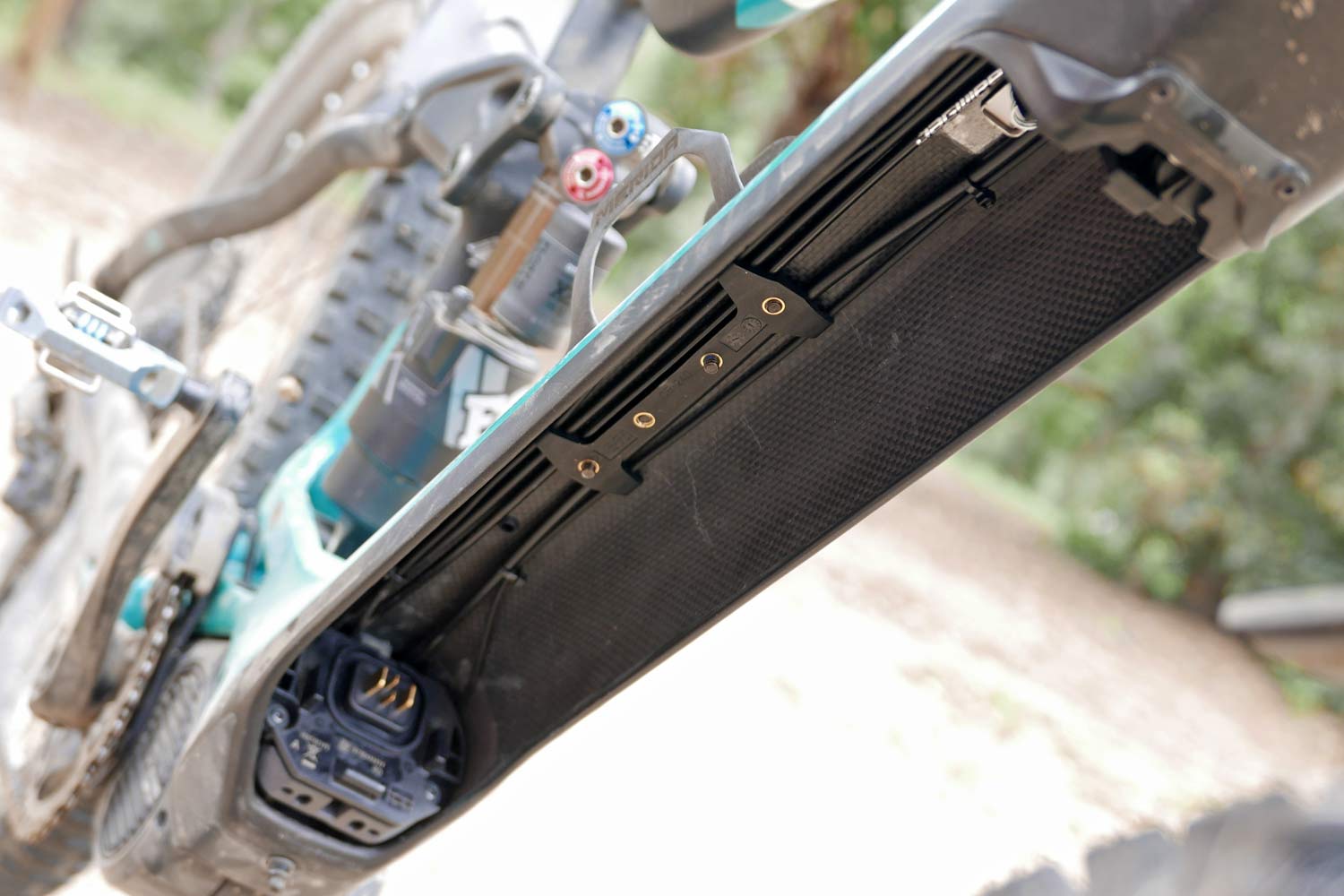 Inside you are left with the hollow carbon downtube structure and the clamped in place internal cable routing. 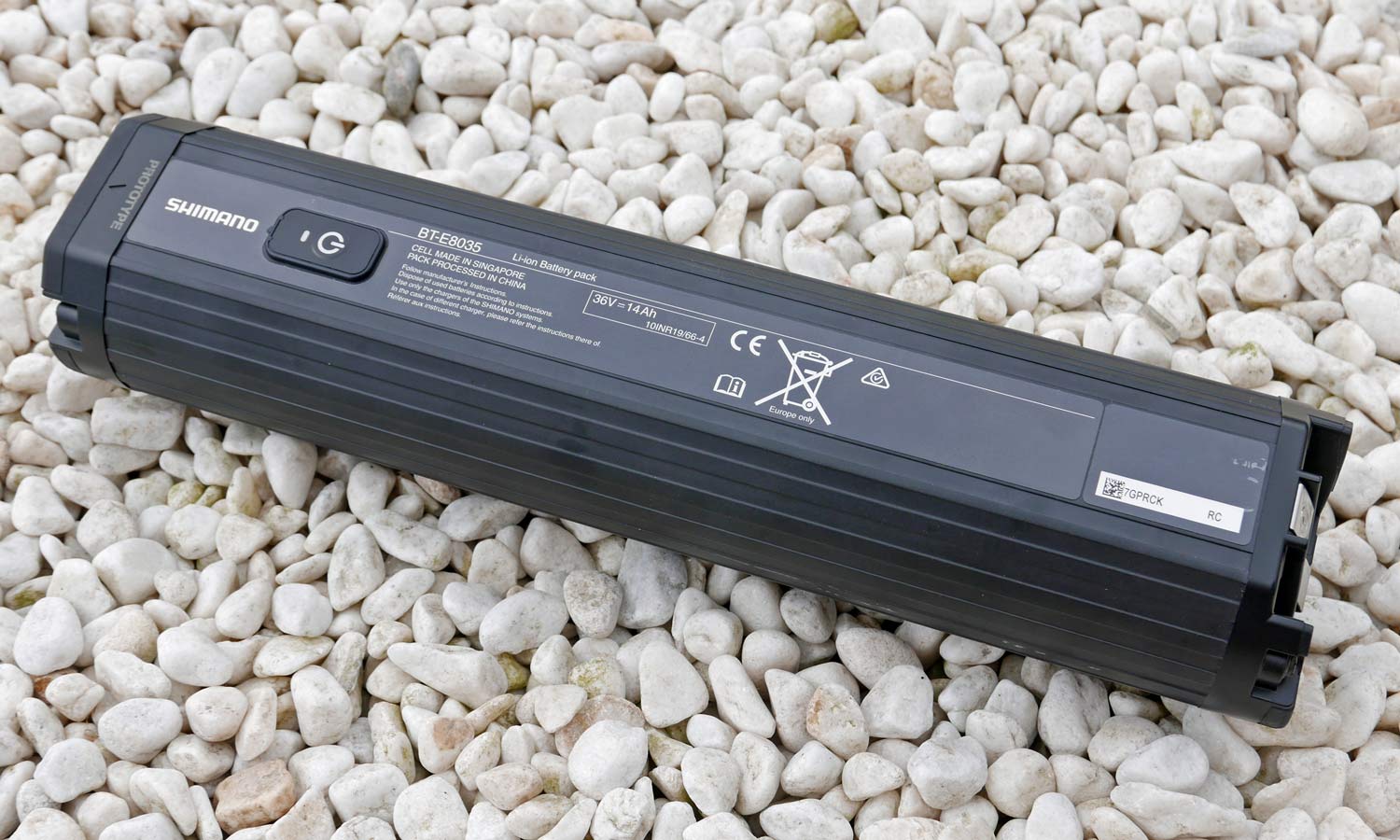 All the batteries we got to ride & play with were still prototypes of Shimano’s new BT-E8035 with 504Wh, making it a mid-range power supply. It has a much more rounded-off shape that Shimano’s original long & square internal battery that really limited frame designs. Looking at how much it weighs, it will add about 2.85kg if you want to carry a spare. 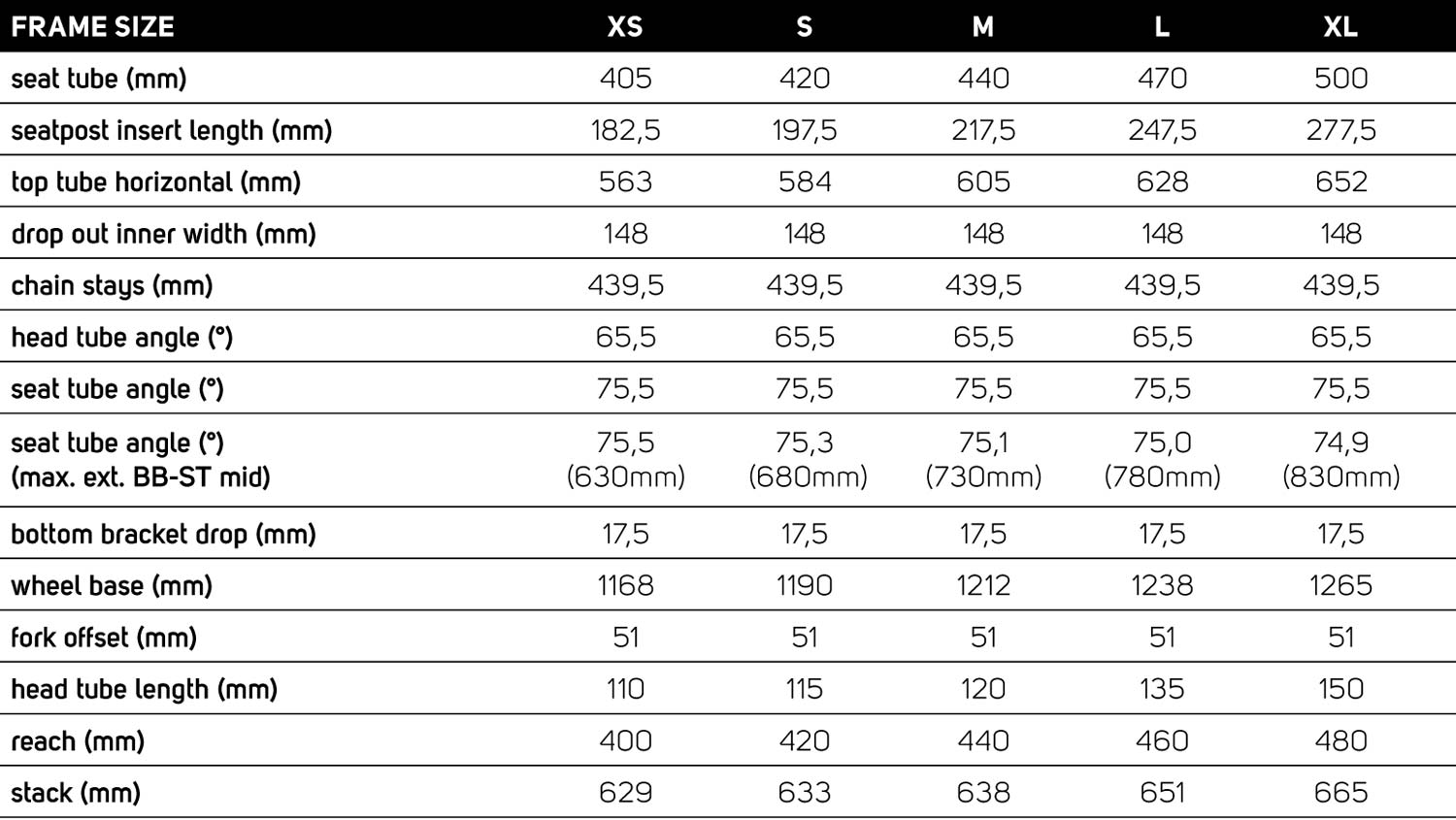 Geometry-wise the bike makes only small updates over the successful alloy eOne-Sixty. Merida says it feels slacker because of the move to a 29″ wheel and the more fork offset that comes with that, but real head angle appears unchanged. That bigger front wheel does mean that stack is a bit higher, and I suspect some riders will opt for a flat bar (over the stock riser) to get that back down easily enough. The seattube steepens half a degree to get more weight over that taller front end when climbing, and the bottom bracket drops 5mm to coincide with the shorter cranks being spec’d. 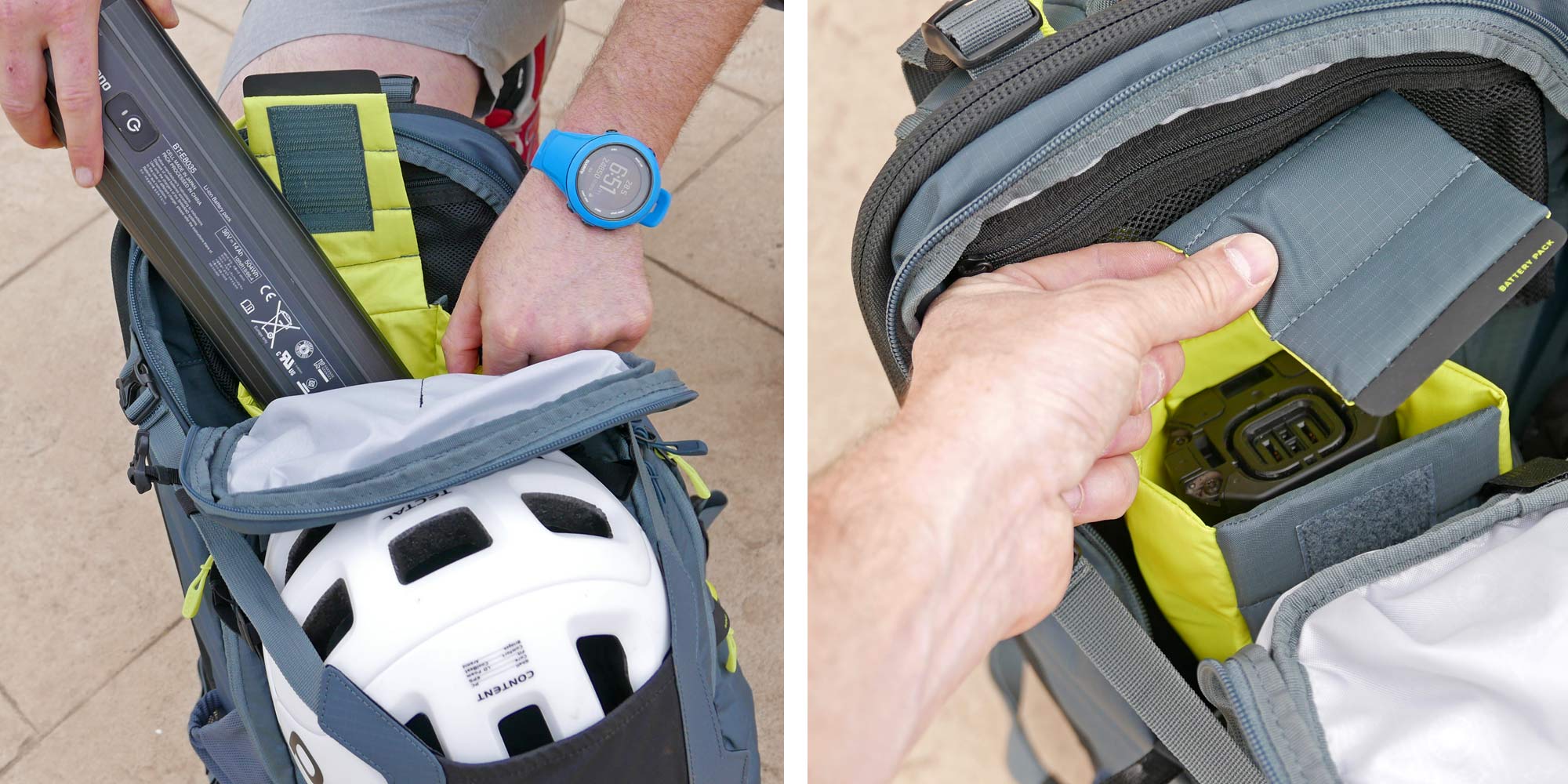 So remember how I mentioned carrying a spare? Merida partnered with EVOC to supply battery-hauling packs that go with their top-of-the-line eMTB. Buy an eOne-Sixty 10K, and it comes with a custom-made EVOC FR Trail e-Ride 20L backpack with a special padded internal battery pocket, and includes a second Shimano internal battery. Remember that will add 2.85kg to your back, but that’s less than the 3kg/3L of water you might already be hauling. Just think, what will get your farther – a second battery or another 2.85 liters of water? 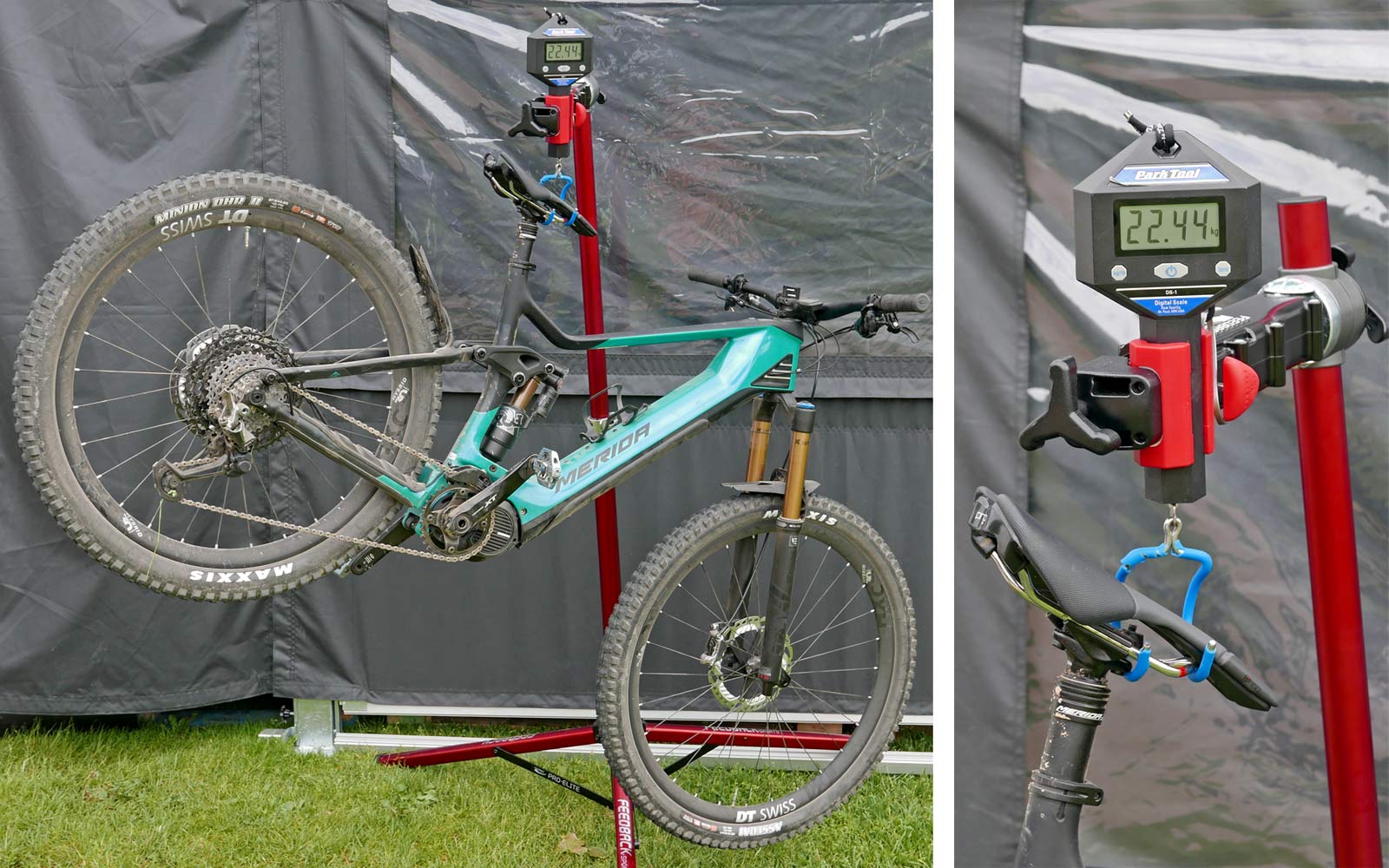 Notice anything about that hanging on a scale photo? Merida’s new Expert TR dropper post will support the weight of the bike hanging from it without extending. That’s quite rare for a dropper with hydraulic internals, and makes life just a touch easier if you need to carry this 50lb bike around. 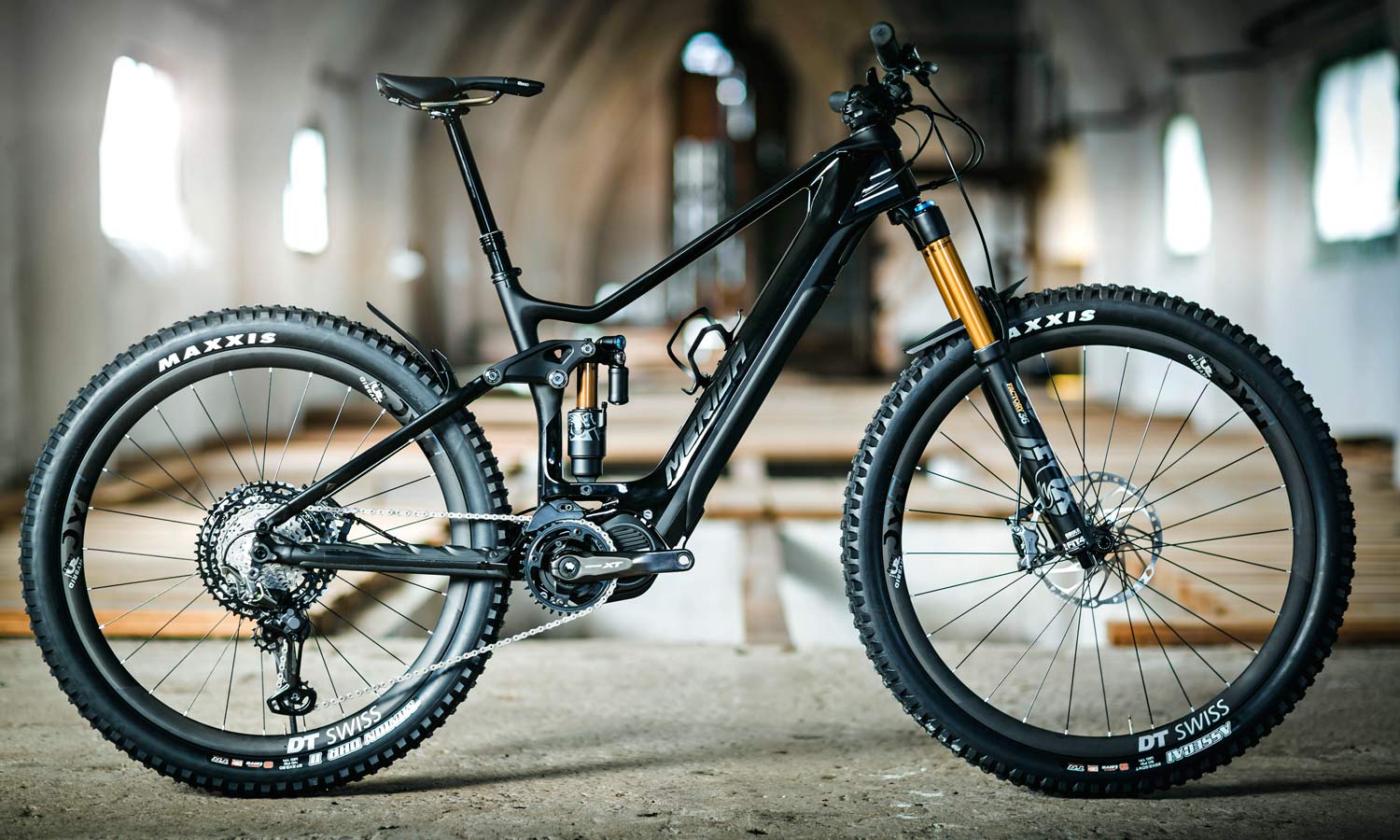 That high-end bike is set to sell for ~9600€ or 9500£ depending on where you are, and is available in the green & black I rode or the more stealth all-black version above.

Three more models are expected to come in at more attainable pricing, all sharing the same frameset. An eOne-Sixty 9000 is said to get XT & Fox Factory suspension for 7000£, an eOne-Sixty 8000 gets a Marzocchi Z1 & RS Super Deluxe at 5850£, and there will be an even more affordable eOne-Sixty 5000 with RockShox suspension for under 5000£. Availability for all four models is slated for the end of September/early October, based on projected availability of the new battery & all of the build kits 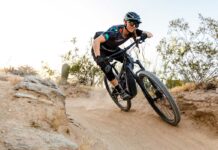 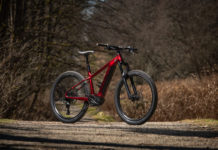 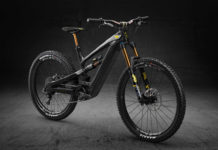