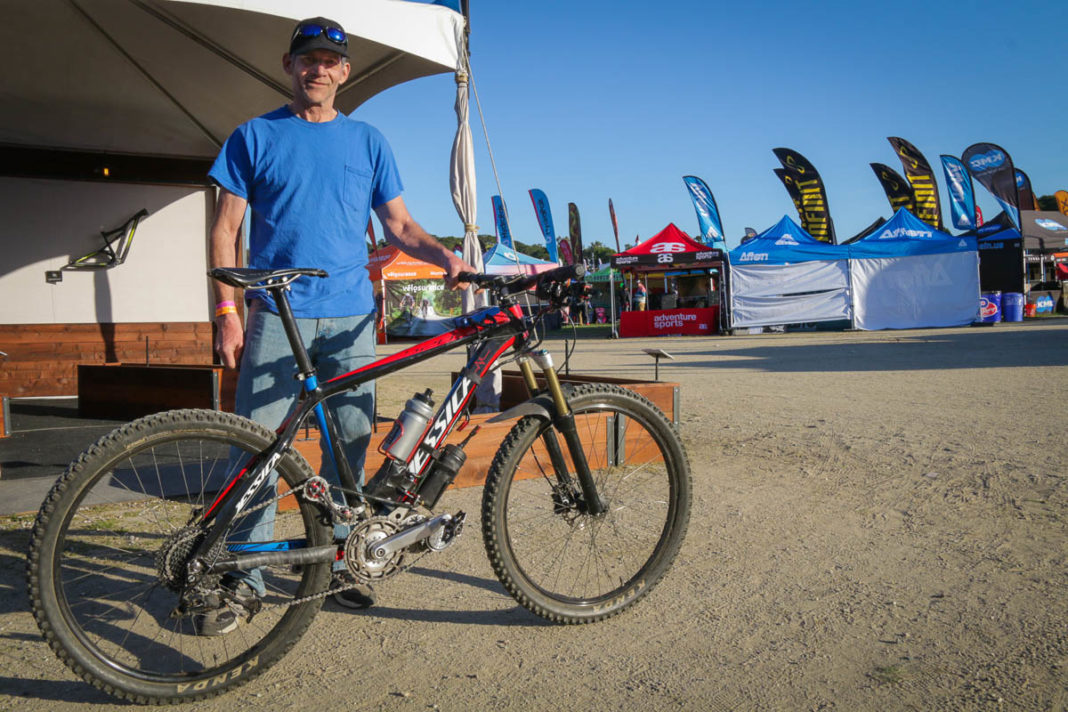 You can always count on at least one interesting bike being walked around an outdoor trade show. From 36ers to hand built prototypes, it’s a good way to grab some attention even if you can’t afford a booth. This year that bike roaming about was an e-bike. Well, technically two e-bikes that are the work of mechanical wizzard, Jon Heim. As a former turbo charger engineer, inventor, and tinkerer, Jon has recently focused on electric vehicles as his latest challenge. Why are the playfully named Heim-Bilt prototypes so interesting? As far as we know, they are the first e-bikes to offer major regenerative braking capabilities. We’re talking 30-50% of the battery capacity being recouped on any grade where the bike can coast. When e-bikes first started popping up years ago, one of the popular questions was always “when is someone going to figure out regenerative braking?” But the answer always seemed to be that bicycles were just too light for it to really work. Apparently no one told Jon that… While the Heim-Bilt prototypes are not pretty, they are fully functioning and point to real future potential. Starting with a fixed rear hub, the convoluted arrangement of derailleurs, chains, and gears is set up so that when you get to a descent and pull the rear brake lever, the drivetrain turns the motor backwards creating energy. As far as we understand it, when you pull on the rear brake lever, it operates a clutch that engages or disengages the motor. When you’re pedaling along, you can activate the electric assist which helps you pedal. But when you pull the lever, that assist is turned off and the clutch is activated which causes the coasting drivetrain to turn the motor in reverse which is what generates the power. Because the regenerative braking is already slowing you down, there is no actual rear brake – but there are two different levels of ‘brake force.’ Currently on the prototypes, the assist is operated with a dial rather than a throttle, but Jon says the system could be built into a true pedalec style e-bike where you have to pedal to get any assistance. To validate his claims, Jon has rigged up RC motor power meters with one measuring the output and the other measuring the input. This is how he’s been able to figure out how much power the system is actually regenerating. Currently, the motor has a 10-1 reduction in gearing, but Jon says the system has an overall 33-1 reduction which is how he’s able to reach these numbers.

While at Sea Otter, Jon made this video where he used 5.5Wh climbing up the hill, but made 2.2Wh going back down. You can see how the tensioners swap positions when he goes from pedaling to regen braking.

The design also allows the bike to be self charging if you were to use it a a spin bike. By putting it in a rear wheel stand, and pulling the brake lever (Jon had a clip to lock it in place for this reason), pedaling the bike not only provides a workout but also charges the system.

Even though they’re still rough prototypes, this was one of the more interesting things I saw at the show just due to the amount of effort involved – especially for someone tinkering in their own shop. What do you think – is this be a sign of things to come for the e-bike world?