While it may seem like ages ago, it’s been just over two years since the first Turbo Levo landed on U.S. soil. But in that short period of time, the e-bike world has been changing rapidly. To keep their place at the forefront of e-bike design, Specialized went back to the drawing board to come up with an all new version of the Turbo Levo – one that’s better in almost every way possible.

To find out first hand, I hopped on a few lengthy flights to get to Pula, Croatia (not easy to get to). It was here that I would have my first look at the new bike and weather permitting, my first rides as well. I say weather permitting as we almost couldn’t get to Pula on account of some severe storms and uncharacteristically rainy weather. When we headed out to ride for the first day it was still absolutely pouring, and the intense winds made it seem even worse. 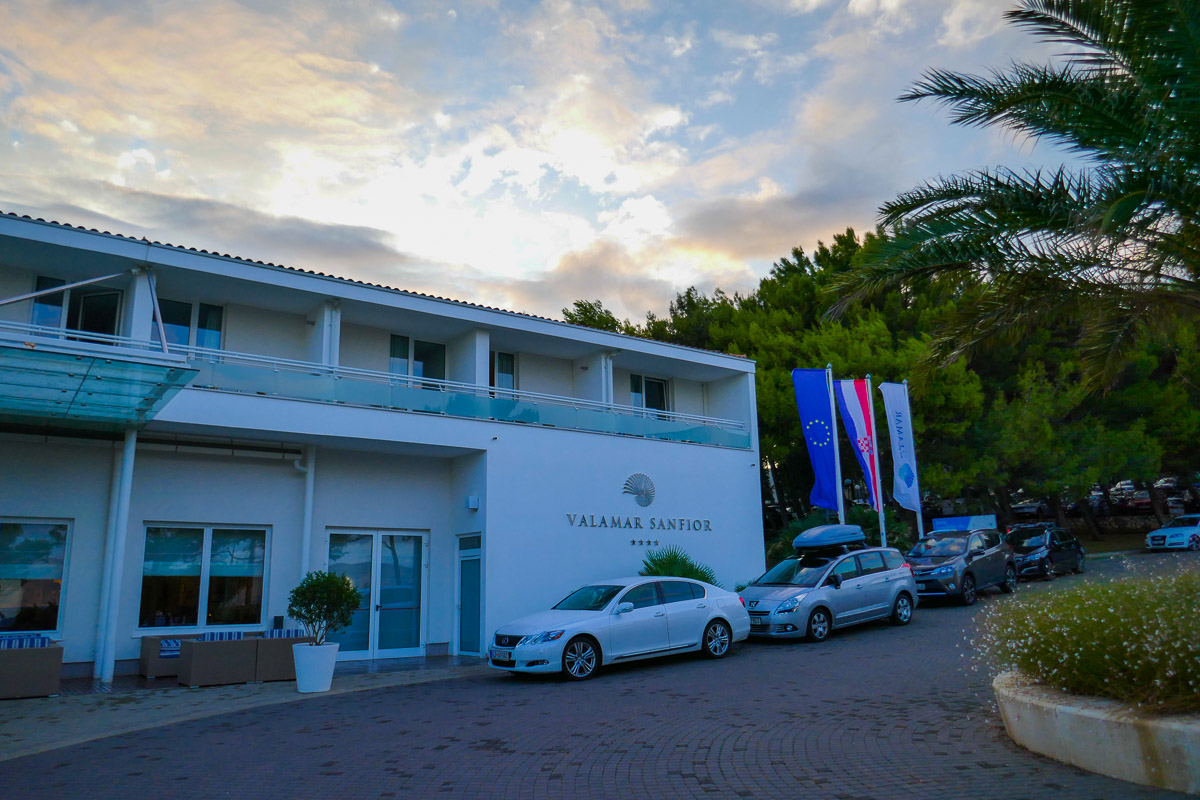 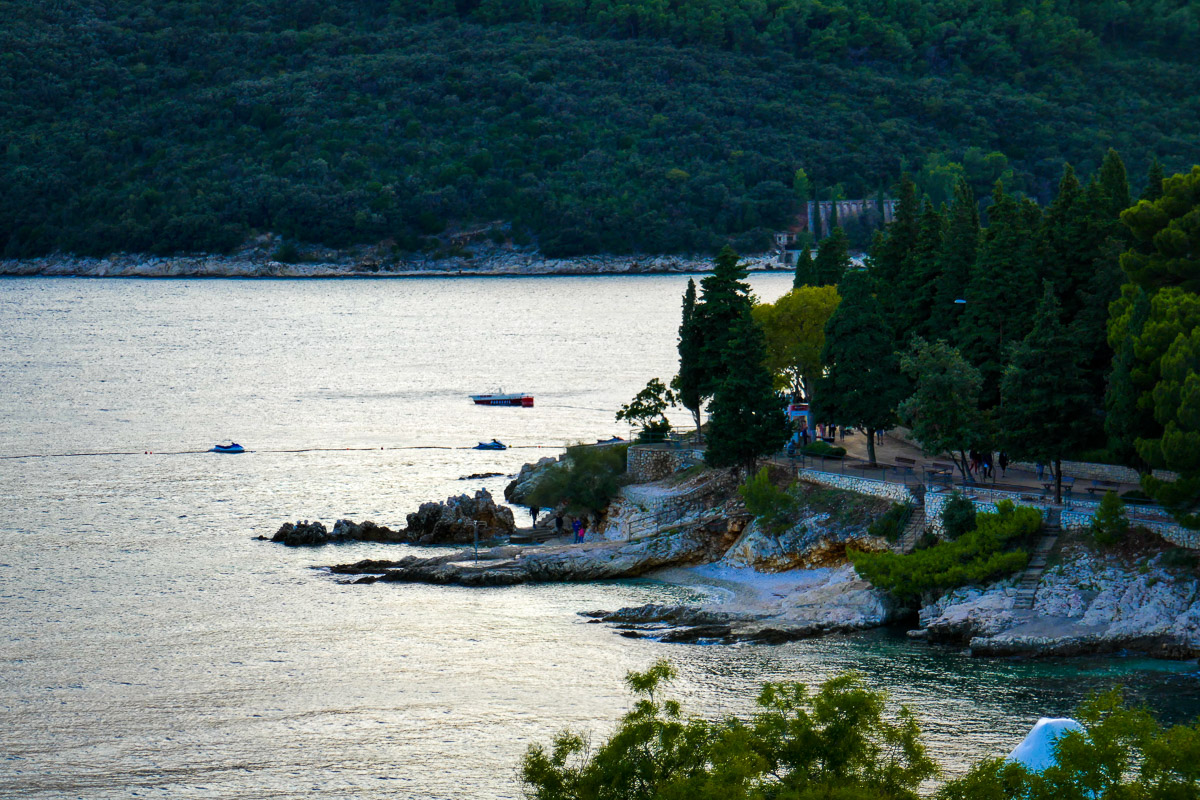 Fortunately, the soil around Rabac where we were staying was mostly rock. Extremely sharp, jagged rock. You definitely do not want to crash here. For a stunning beach side resort area, the trails were surprisingly good. At this point, I don’t think a lot of people are making their way to the Valamar Sanfior to go on mountain bike epics, but with a small pump track and trail center, it did the trick. And after a bit the weather gods finally smiled on us as well with completely clear skies and rapidly improving conditions.

The first day was spent getting to know the bike, and getting it dialed in for the big day that would follow. But a few things were instantly apparent – this was not the Turbo Levo as we know it. This was something completely different.

For starters, the geometry is vastly improved – but so is the geometry on the new Stumpjumper. For the same reasons, the Levo has a longer reach, slacker head tube angle, and steeper seat tube angle. The result is a bike that feels like, well, a mountain bike. Other than the weight, there’s nothing that would make you think this was an e-bike if you didn’t know any better. That geometry made for a much more enjoyable ride, especially when wrestling the bike on greasy trails while navigating hidden rocks and tree stumps. 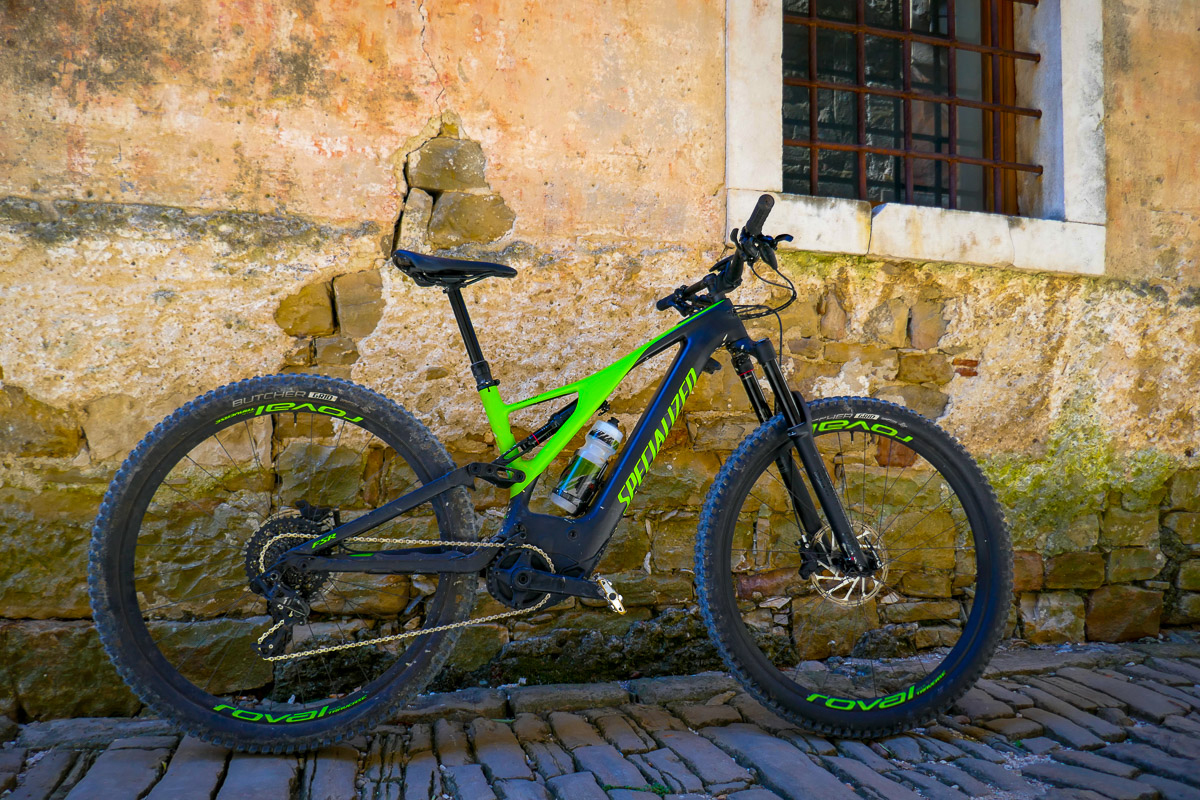 I was personally on a medium Turbo Levo Expert, which like the Stumpjumper, fit my 5.8″ frame quite well. Once again, I was ecstatic to see that I had plenty of room to run the full 160mm Specialized Command post, and even had room to spare thanks to the low seat tube. A 40mm stem felt right at home, and the 780mm bars offered plenty of control without feeling too wide. 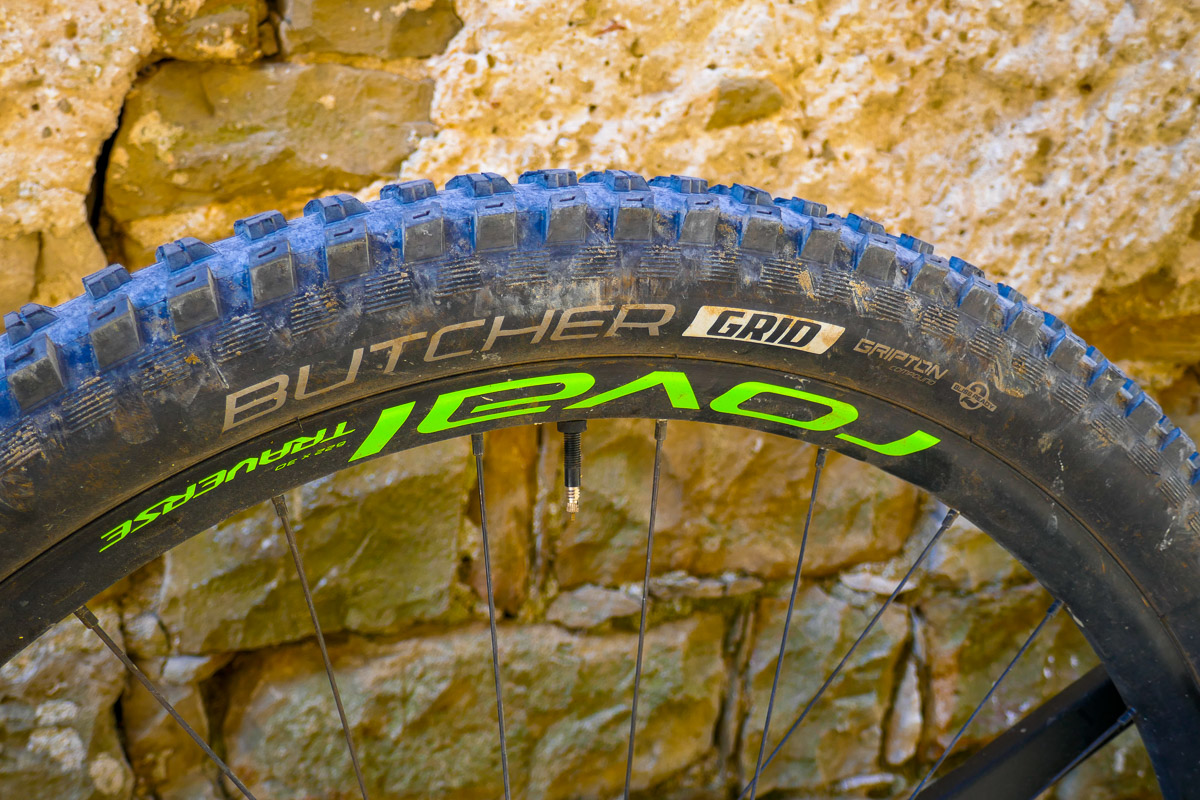 Surprisingly, in spite of the slick conditions I felt like I had more confidence on the small jump line than I would have had on a normal mountain bike. Some posited that this may be due to the bike’s increased mass over the jumps, making it more stable in the air. Or it could be just that the geometry and suspension work really well with the 29 x 2.6″ tires. Whatever the reason, I like it.

The flip side of that is that the Levo still manages to be a nimble, confident handling bike. Even with the increased mass of an e-bike, the Levo had no problem navigating some steep, techy terrain that would certainly test the caliber of any mountain bike – electric or not.

Most importantly for me, the biggest improvement comes in the way the power is delivered. A lot of e-bikes, not just the original Levo, suffer from strange lagging and surging based on how you’re pedaling. This is usually the worst in technical sections where you pedal kick or stop pedaling completely to clear a rock, and then need to get back on the power immediately. While the original Levo exhibited some of that in Moab, the new Levo was flawless. The power came on when you needed it without any sort of pause or delay. 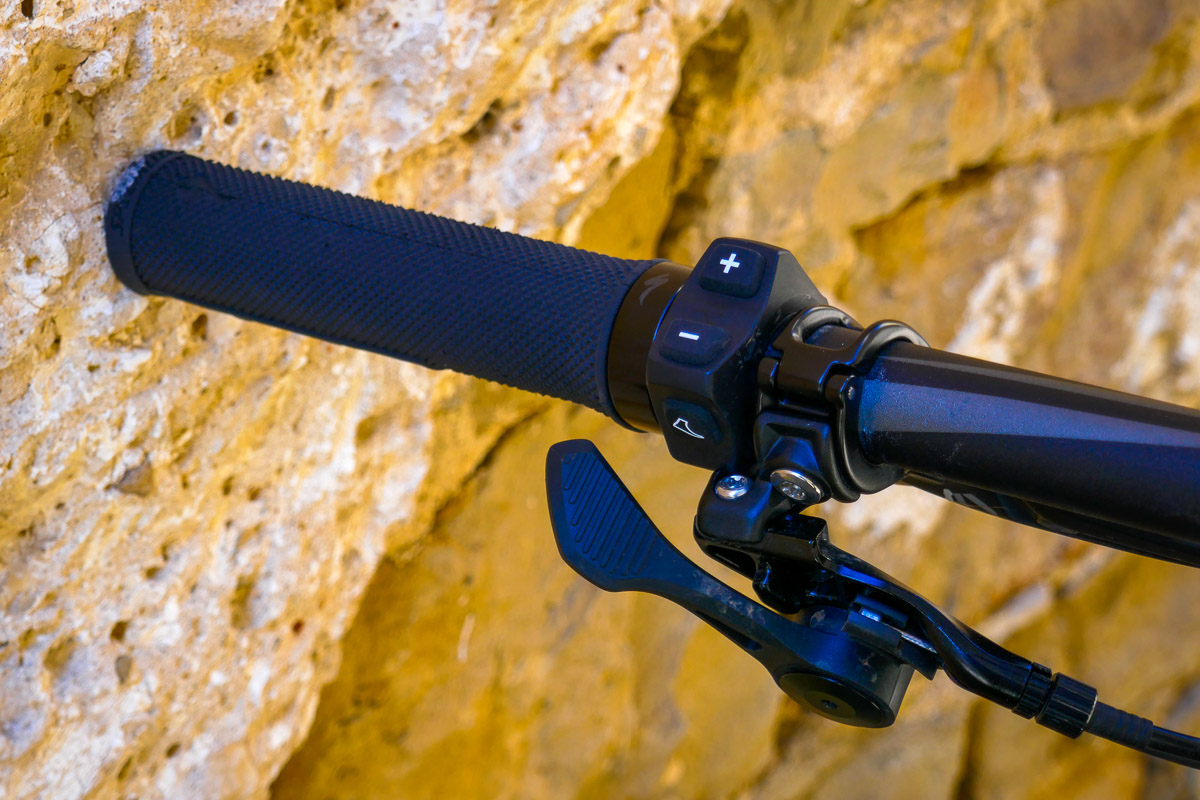 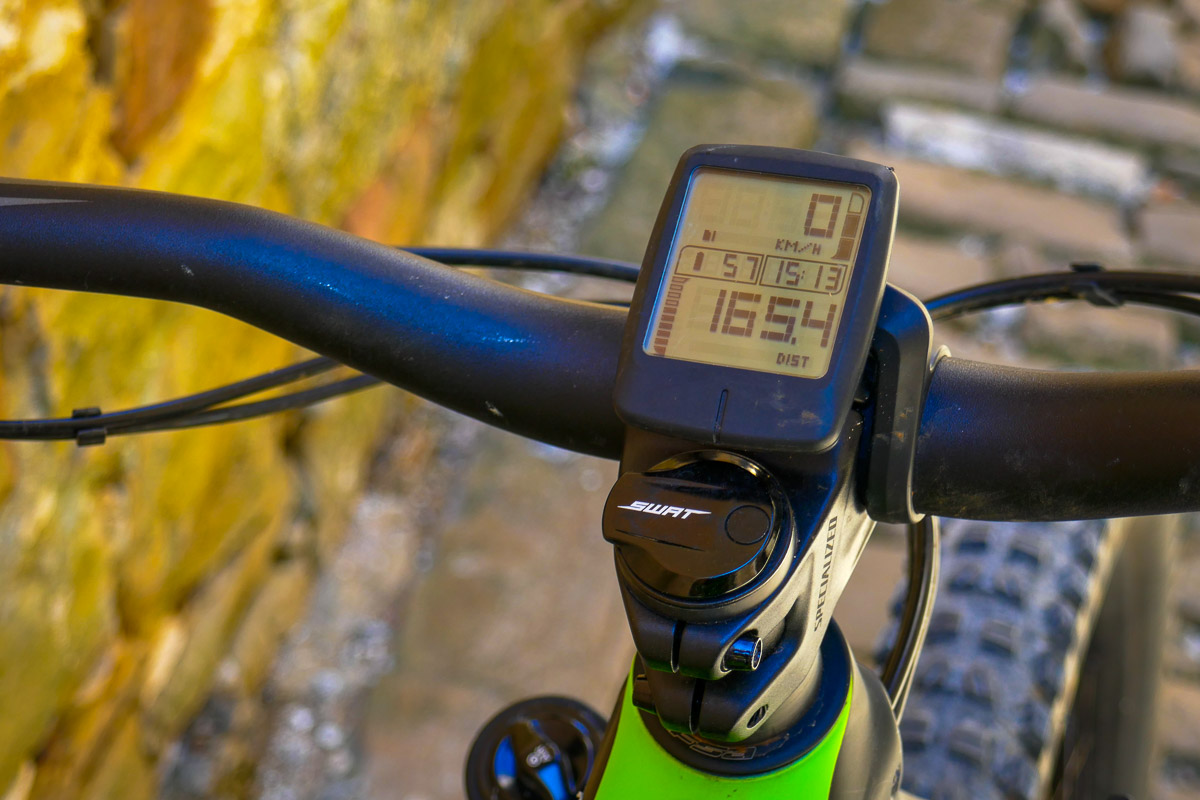 That power is also more controllable now through a number of devices. I personally like having the remote on the bar so that I can thumb through the modes in order to extend battery life, so I’m happy that the bike now includes one. However, if you don’t like it, it can easily be removed and you can control the modes thought the Turbo Connect Unit (TCU) on the top tube.

The new Turbo Display Unit (TDU), is also a nice touch. Only available separately for $80, I would buy this just to have the built in power-meter function. Then you get a sense of how much you’re actually working. When we were climbing some of the steeper hills on the second day, it was common for me to see 300-400 watts of my own power being put out depending on the mode. Don’t let the electric assist fool you, you’re still getting quite the work out. 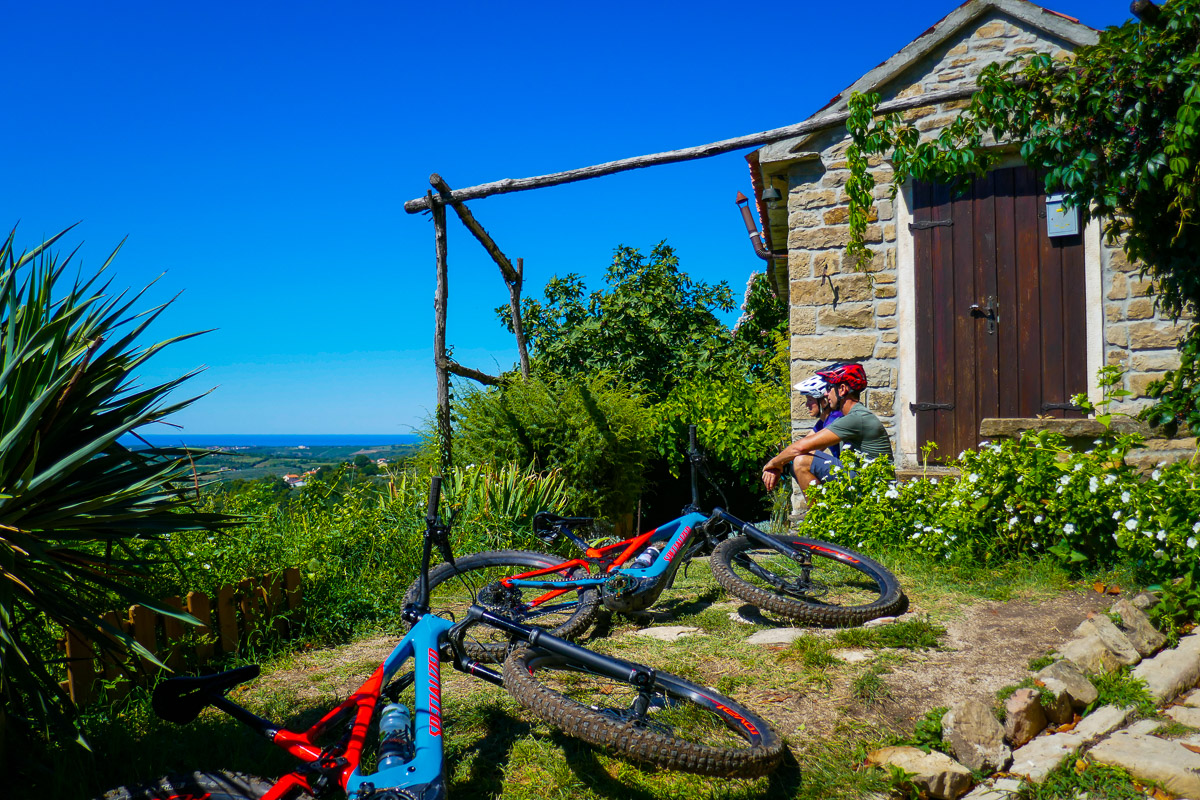 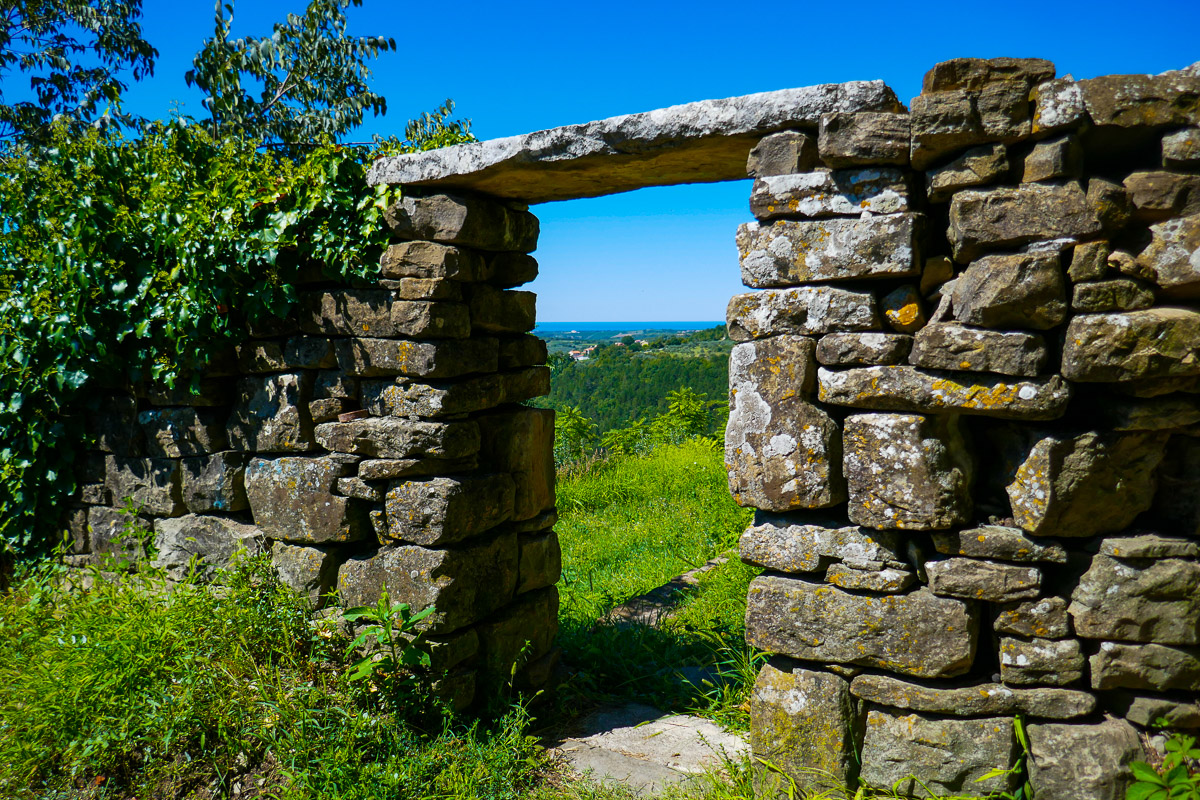 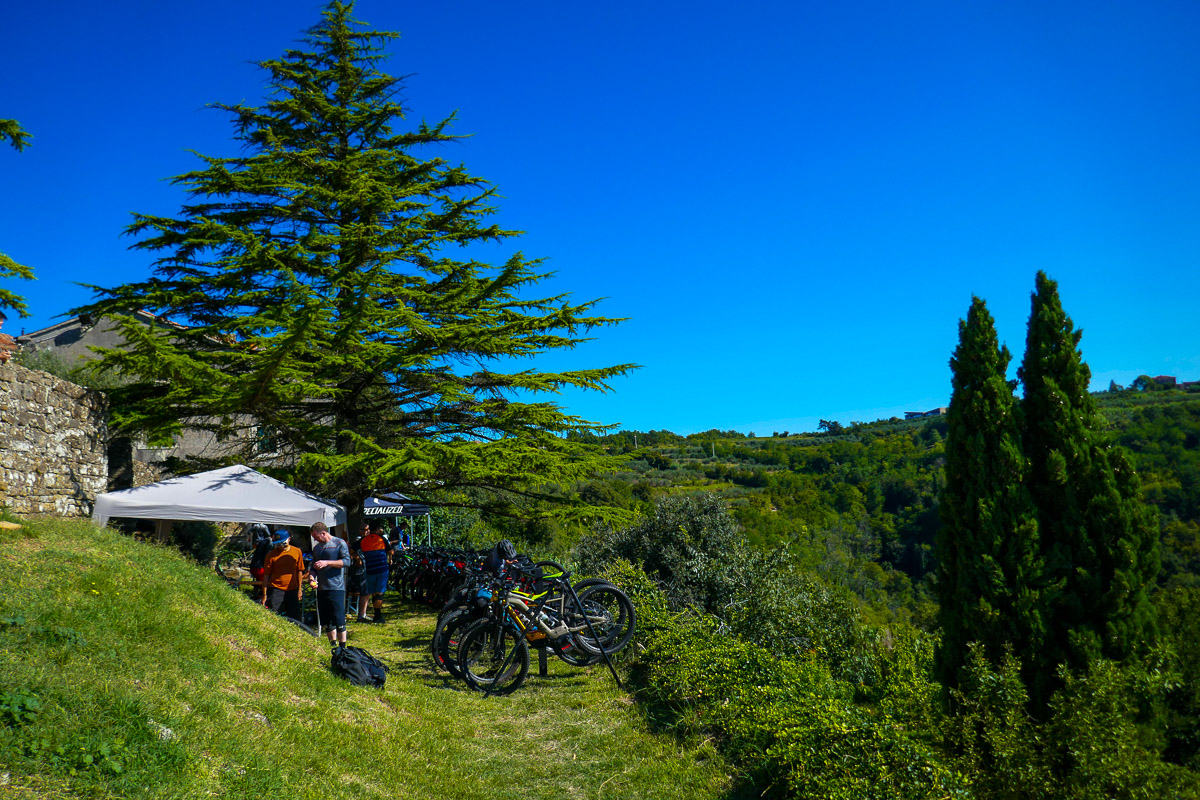 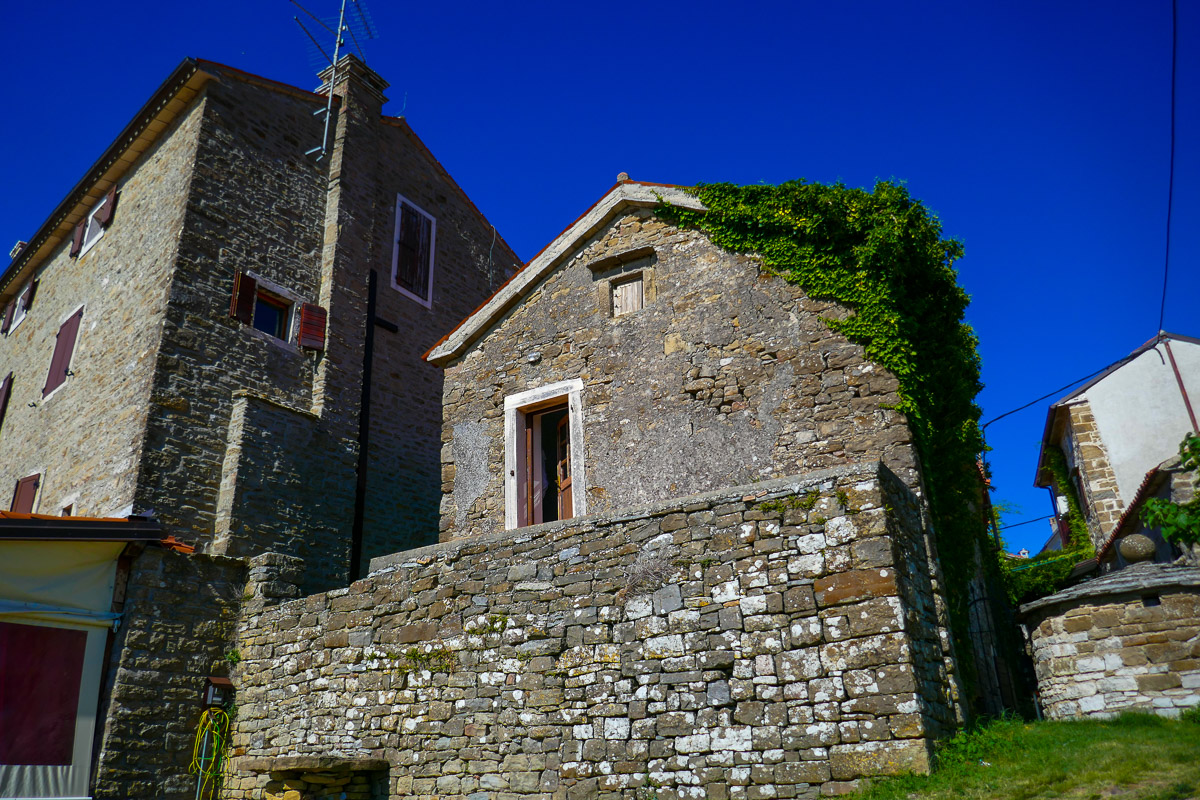 The only difference is that the workout can be extended to the entire day as we experienced on day two. This time, we were on the opposite side of the region of Istria, in a picturesque hill-top town called Grožnjan. Here, with the town situated at the top of a very steep hill, each run would essentially be straight down, followed by what would be a terrible 1000 foot climb on a normal mountain bike. A fit rider could do a couple of these in a day without feeling totally shattered, but the ride we did would be pushing it. And once we finished, I was tired, but I didn’t feel like I couldn’t keep riding.

Trails this steep made testing brakes and the Turbo mode a must. Specialized made sure to equip each model with 200mm rotors and four piston brakes, and I’m thankful for it. The added heft of an e-bike makes bigger brakes a must, and for an e-MTB that’s meant to be ridden aggressively, this set up should be standard.

When it was time to head the other way on the trails, for the most part I kept it in Turbo – an indication of just how much more range the new battery and motor system offer. I would play around with the settings, often turning it to Trail or Eco mode when descending, but for the climbs it was just too tempting to throw it in Turbo and relax. Near the end of a nearly seven hour day I started getting concerned about my range and dialed it back whenever possible, but I still finished the ride with 3 bars (out of 10). We of course, were on the bikes with the larger 700Wh batteries which are the reason for the increased range. If you’re on the fence between the Comp Carbon and the Expert model, go with the Expert – the increase in battery life is worth it. However, you can upgrade the battery on the bikes that include the 500Wh batteries, though Specialized expects replacement 700Wh batteries to cost somewhere in the ballpark of $1,000.

I didn’t get to play with the new Mission Control app much, but I did download it, connect the bike, and run through the available settings. The ability to tune nearly everything through the app is a huge plus, and the new app is much nicer to use.

The Brose motor is already a pretty quiet system to begin with, but it seems that Specialized was able to make it even quieter. Then there’s the addition of the new shaped chain stay protector developed for the Stumpjumper, and you end up with a very quiet bike – as it should be. 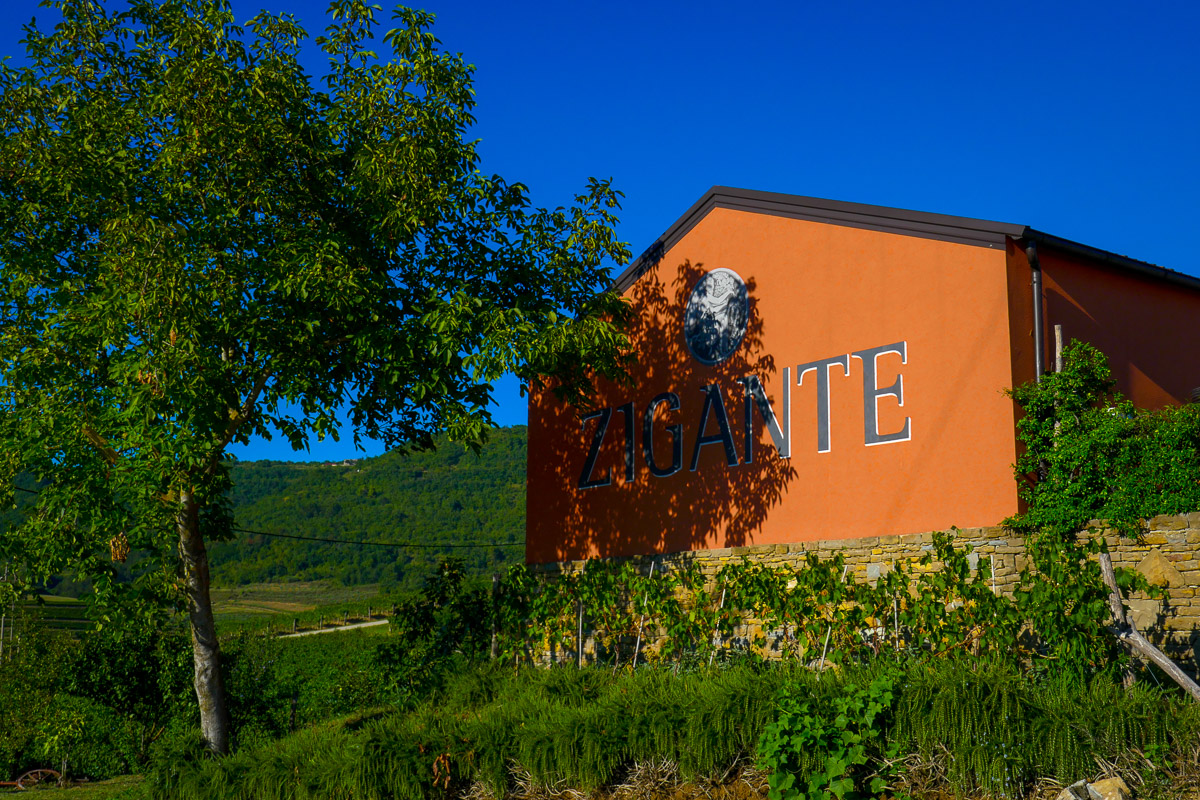 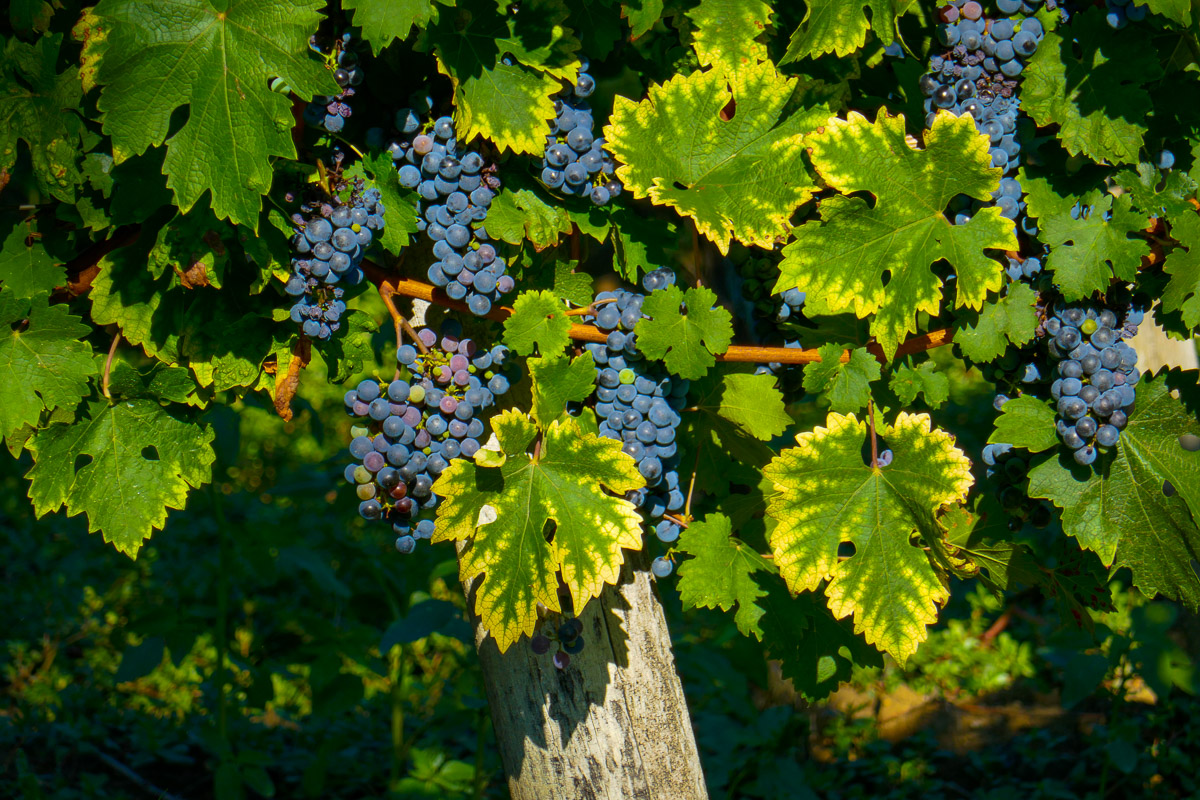 What really impressed me about the new Levo was just how natural it felt on the trails. For the first time, this felt like a mountain bike first, and an e-bike second. Like you took your favorite mountain bike and added a motor to speed up the worst parts of the ride so you could get back to the fun. Only, that motor isn’t just slapped onto the outside of the frame. It’s intricately tucked into a vastly improved frame design that blends the best of both worlds.

Specialized has devoted a massive amount of dollars, engineering, and design into their e-bike development, and it is clearly paying off. Since the original Levo, a number of companies have caught up, but with the introduction of the new Turbo Levo, Specialized has charged right back to the front of the pack.

Missed the tech break down post earlier? Check it out here.