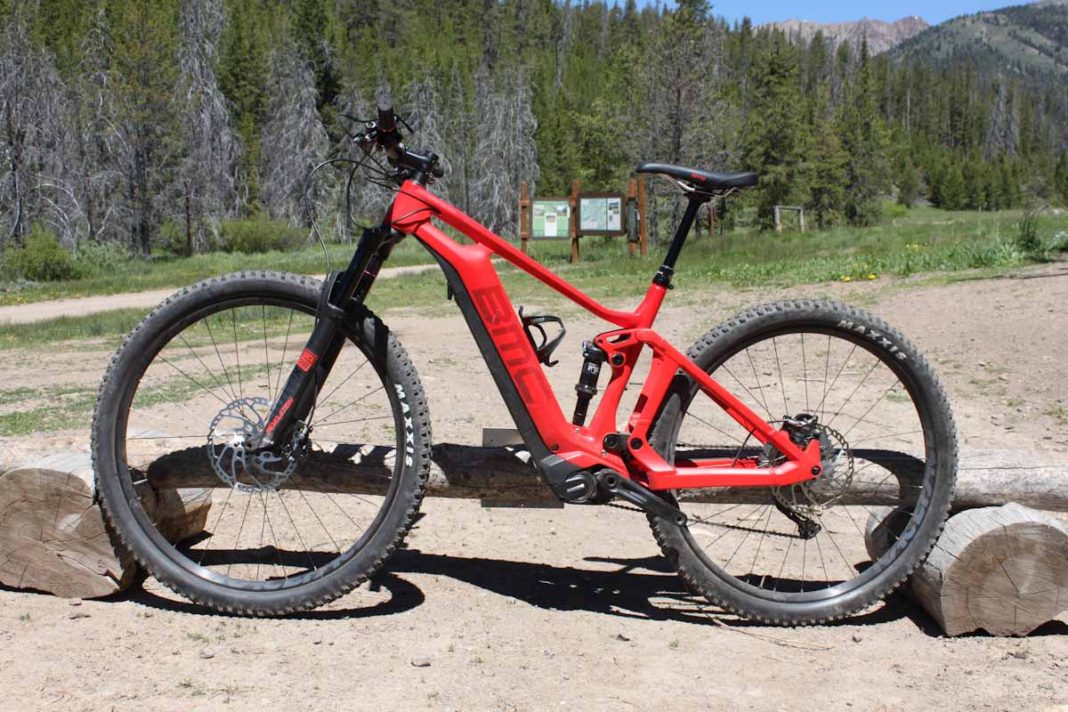 With a huge variety of motorized-friendly trails, Sun Valley, Idaho was the ideal place to host Cranktank’s inaugural Impact press camp. We lucky (but hardworking!) media folks were invited to ride the latest E-MTBs, mountain bikes and gravel bikes, not to mention components, clothing and gear from a long list of premium cycling brands.

About a month ago BMC’s two E-MTB models became available in the USA, and I got a chance to ride the higher-spec 29” Speedfox AMP Two on a lengthy loop in Idaho’s Greenhorn Gulch zone. Let’s charge right into the main features and my first-ride impressions… 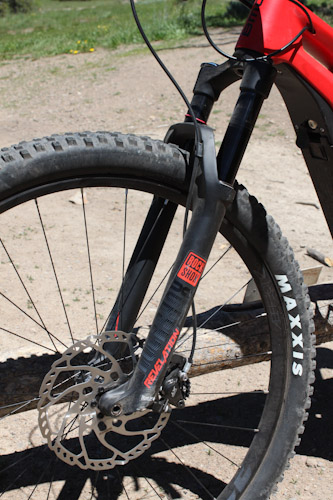 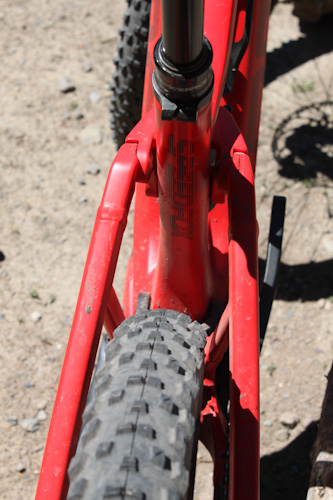 The Speedfox AMP is built with a carbon front and aluminum rear end, riding on 29” wheels with 130mm travel. Up front is a 130mm Rockshox Revelation RC. In the front triangle, their Twin Hollow Core tube design bridges two separate tubes together to house the battery in the down tube while keeping the front end nice and stiff. The rear ends and pivot hardware have been significantly beefed up to cope with the extra weight of the electronics and increased mileage E-bikes rack up. This does come at a weight penalty, but BMC felt adding durability was a worthy trade. 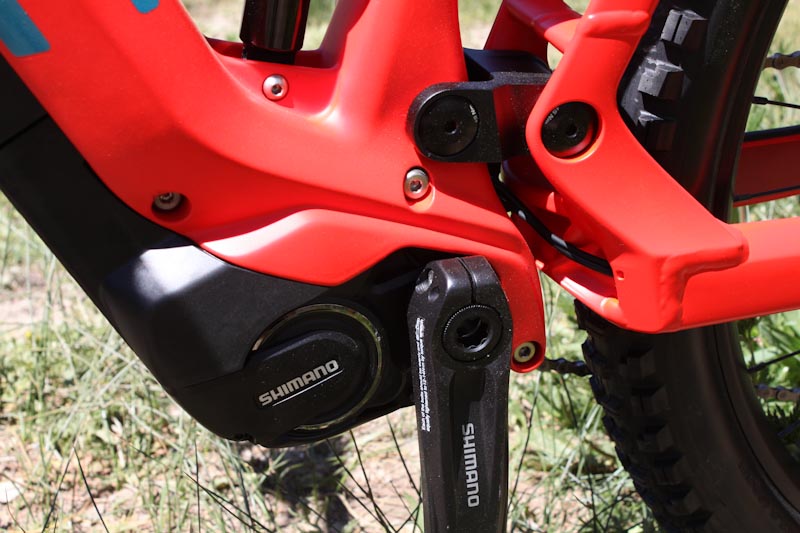 BMC’s AMP bikes use Shimano’s XT E8000 powerplant, and in the USA they are Class 1 bikes which top out at 20mph. They have integrated the speed sensor into the chainstay, and placed the magnet on the brake rotor so it can’t fall off or out of position like a spoke sensor might.

The bike uses BMC’s Advanced Pivot System (APS) suspension platform, but the Speedfox’s rear end has been tweaked in specific ways: the geometry is not only refined for the 29” wheel size, but the pivot locations have been optimized for E-bikes, particularly with the goal of offering excellent traction. For more info on the bike’s specs, check out our previous article announcing the stateside release of the Trailfox and Speedfox AMPs. 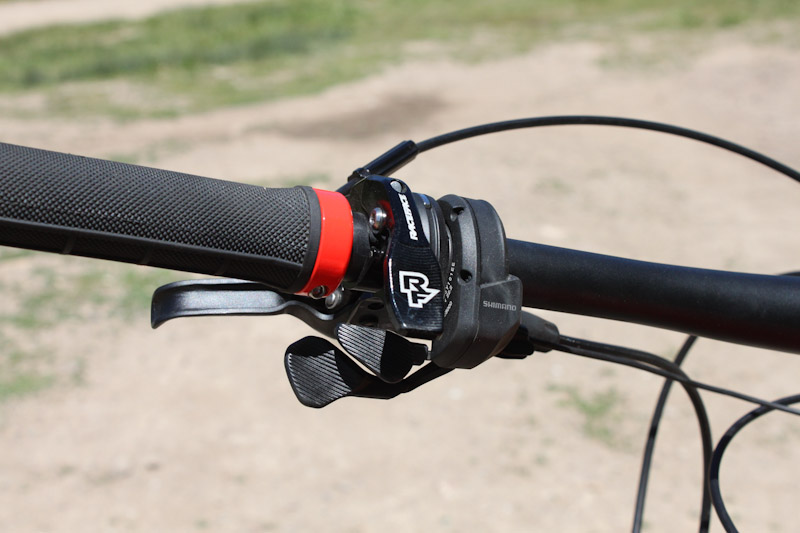 After only a few switchbacks, I learned about one quirk of the STEPS drivetrain the hard way. I switched up through the assist modes as we began to climb, but it was obvious the bike wasn’t providing any power. I went back to the BMC crew and they noticed I had set off a trouble code – I was told if you turn on the bike with your foot on a pedal or while rolling, the torque sensor readings get messed up and the bike won’t provide assist! They simply turned the battery off and back on with the bike sitting still, and I was good to go. For anyone new to e-bikes, this is a common issue. Just remember that when you turn the bike on, you should be standing to the side without your feet on the pedals.

The Speedfox had Shimano’s Firebolt mode selector which greatly resembles a front derailleur trigger shifter, making it easy and familiar to operate. At any level, Shimano’s motor brings the power on smoothly and naturally. It also does this rather quietly, emitting a very tolerable electric buzz even in Boost mode. 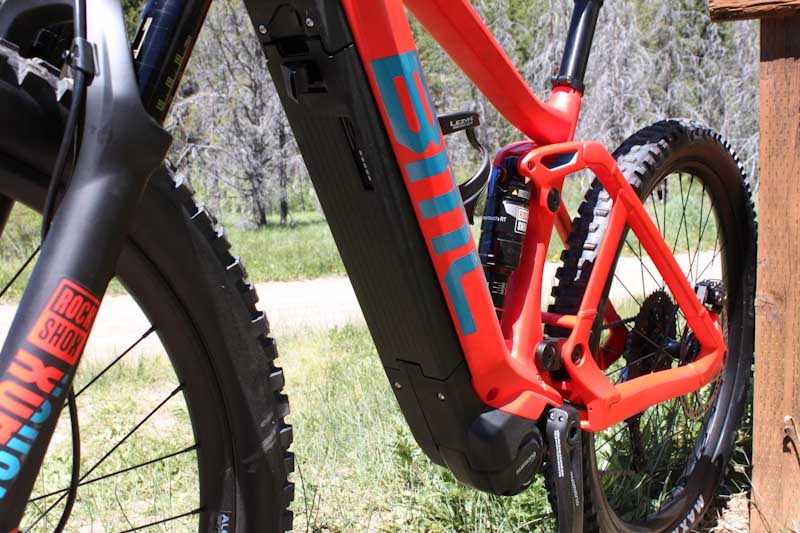 The XT E-8000 motor provides three stock levels of assist- Eco, Trail and Boost. While cruising on flatter terrain, there isn’t much noticeable difference between the Eco and Trail modes, but when you put a bit of pressure on the pedals to climb, Trail mode responds with a lot more juice than Eco. The Boost setting was more than adequate to make me feel superhuman! I had no problem rocketing myself and the bulky bike up some pretty steep pitches. While the settings are pre-determined, you can make changes to the levels of assist with the Shimano e-tube app using the bluetooth connection to the bike.

The size medium Speedfox AMP I rode has a 66 degree head tube angle, 445mm reach, and 449mm chainstays. I felt comfortable on the bike right away, and despite the weight the Speedfox was fairly nimble and whippy around corners. The rear end was kept as short as possible, and didn’t feel too lengthy as I pumped over the backside of (and even got some air on!) the trail’s flowy rollers.

While BMC raised the bottom brackets on the Trailfox AMPs, the 29” Speedfoxes stayed the same as the non-electric models with a 35mm BB drop. I struck my pedals quite a few times on the technical sections of the trail, as you don’t want to stop pedalling E-MTBs during an uphill burst. I imagine we’ll see E-bike brands working to find a happy balance here in the next few years, by employing either shorter cranks or raised BB’s (Shimano recently released 165mm versions of their e-bike crank for this very reason).

The suspension tweaks definitely did their job as far as providing excellent traction, as I never even got close to spinning a wheel. In fact, on one steep and loose climb I’m sure I would have gassed myself out and spun out on a non-electric bike… but with power behind me and BMC’s tuned suspension, I stayed on the bike and cracked a huge smile!

The BMC guys nailed the suspension setup on the fork and shock for me. I used the Fox Float DPS Performance (with Evol canister) rear shock’s trail mode for climbing, and opened it up on the descent. Since this was a pretty buff trail I didn’t get much of an impression on how the bike gobbles up bigger or harsher hits, but I did notice even while wide open the Speedfox AMP provided great support while pumping rollers, and I love when a bike feels like it’s pushing you forward like that. 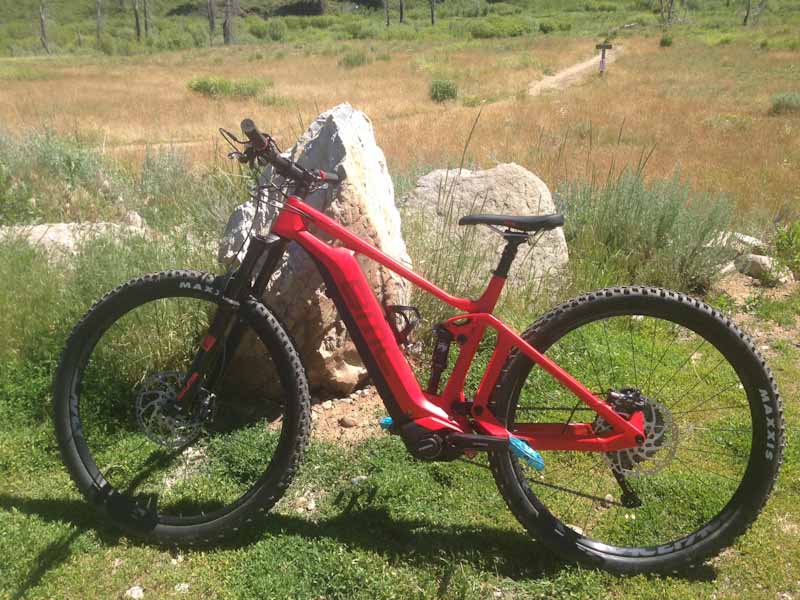 E-MTBs like the Speedfox AMP have quickly become solid performers, and putting the amazing uphill capability and added weight aside, they ride a lot like a normal mountain bike. I personally still enjoy descending technical trails or jump lines more on a nimbler and poppier 30lbs. bike, but in the name of going further, faster, the compromises are totally reasonable.

With more than adequate power that kicks in smoothly, comfortable modern geometry and their E-specific rear suspension, BMC has tuned the Speedfox AMP into a serious contender that will inspire you to tackle longer routes, or go back for a second lap for more trail ripping fun! The Speedfox AMP Two retails for $7499 USD. Frame sizes are S/M/L, and the ‘Two’ model comes in Red only. 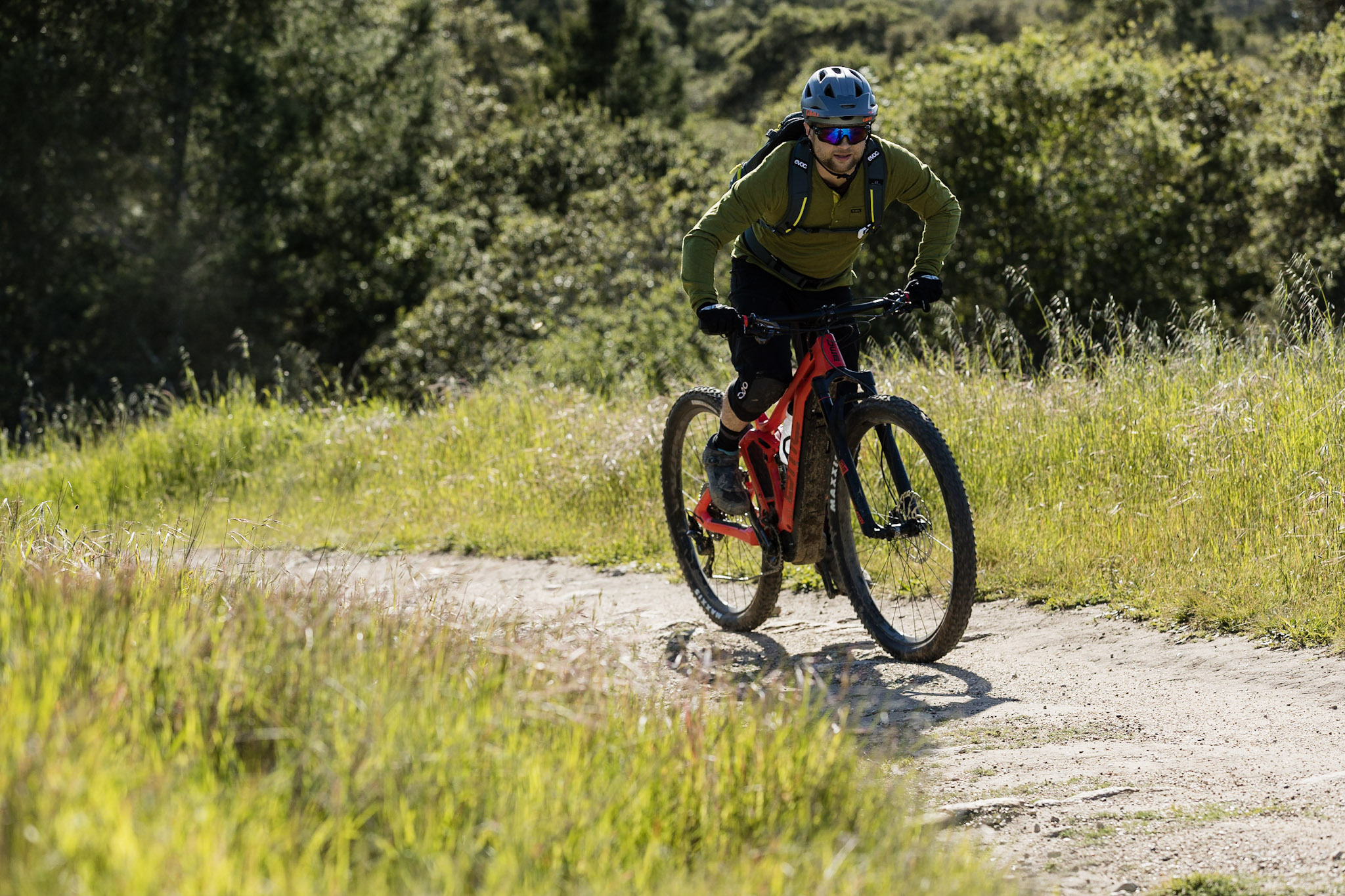 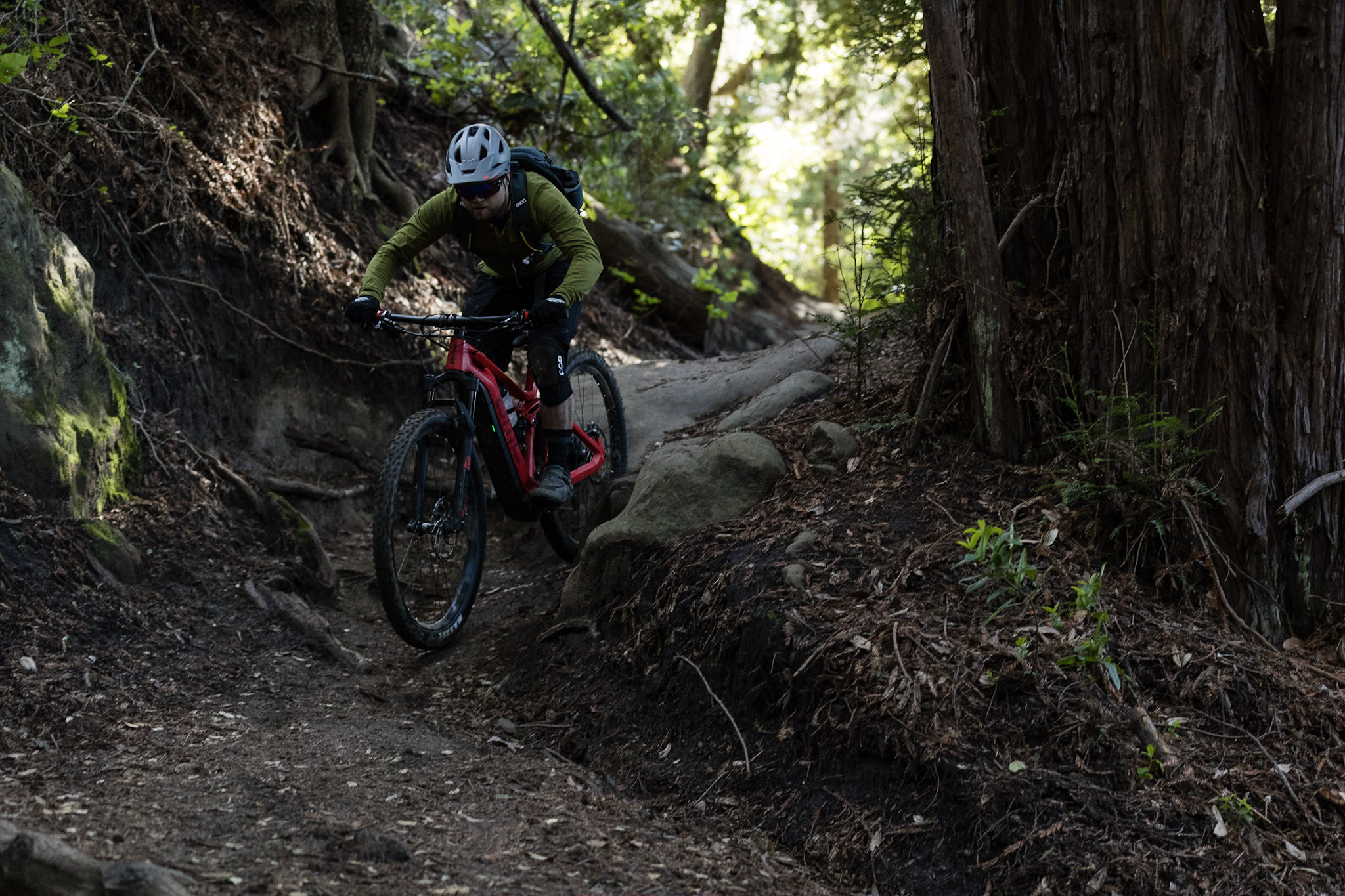 During the initial U.S. launch of the two BMC AMP models, I also had the chance to ride the same bike while out in California. I’ve ridden quite a few e-MTBs at this point, but the Speedfox AMP is an easy stand out. Currently in the sea of e-bike options, the Shimano STEPS bikes are well at the front when it comes to mountain bike design. Between the motor design which allows companies like BMC to run shorter chainstays for real MTB geometry, to the Firebolt shifter to run through the assist modes, the STEPS machines just seem like they’re ahead of the game. But that’s what you get when a legendary component manufacturer like Shimano decides to get in on the e-bike market. 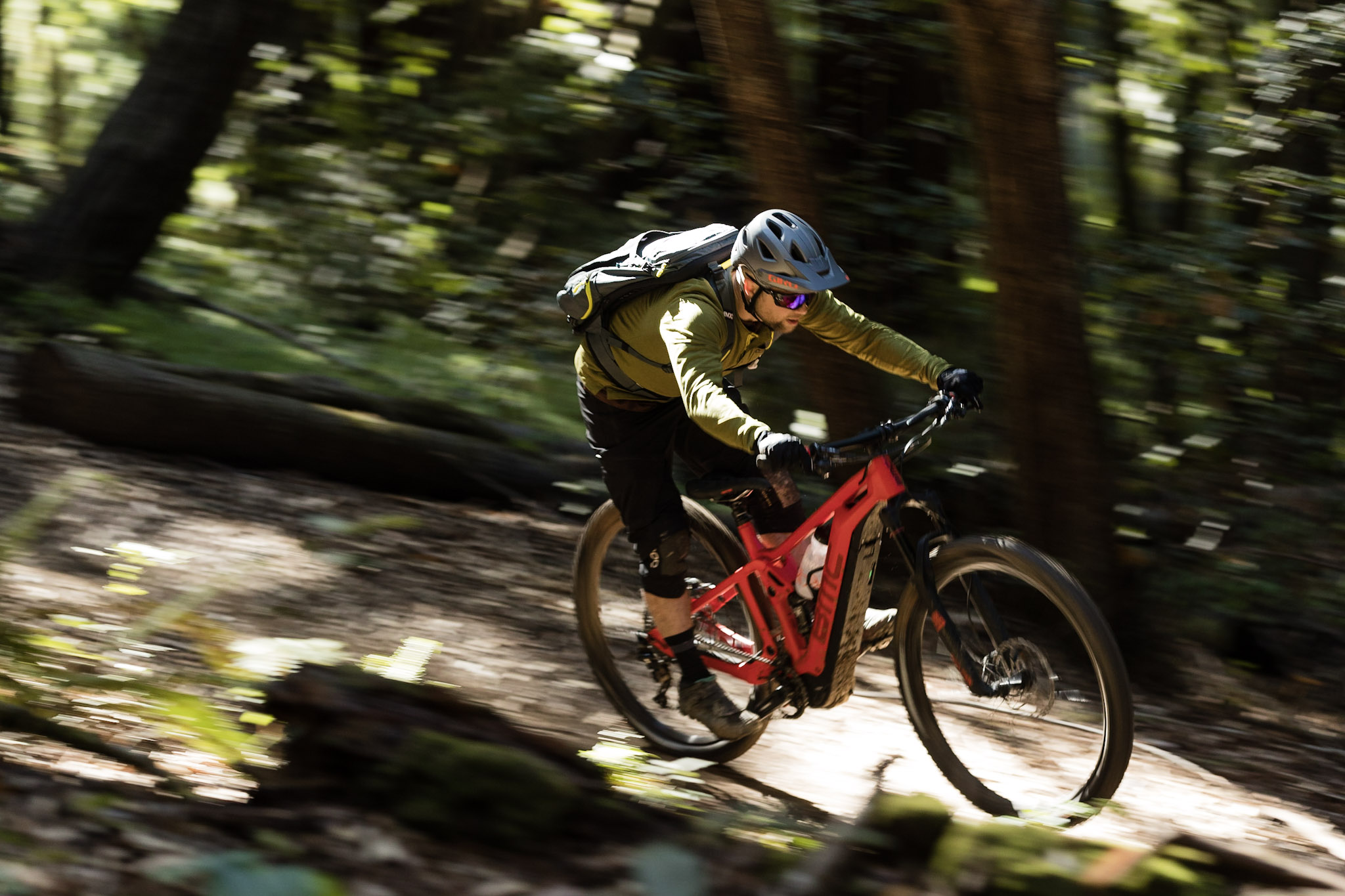 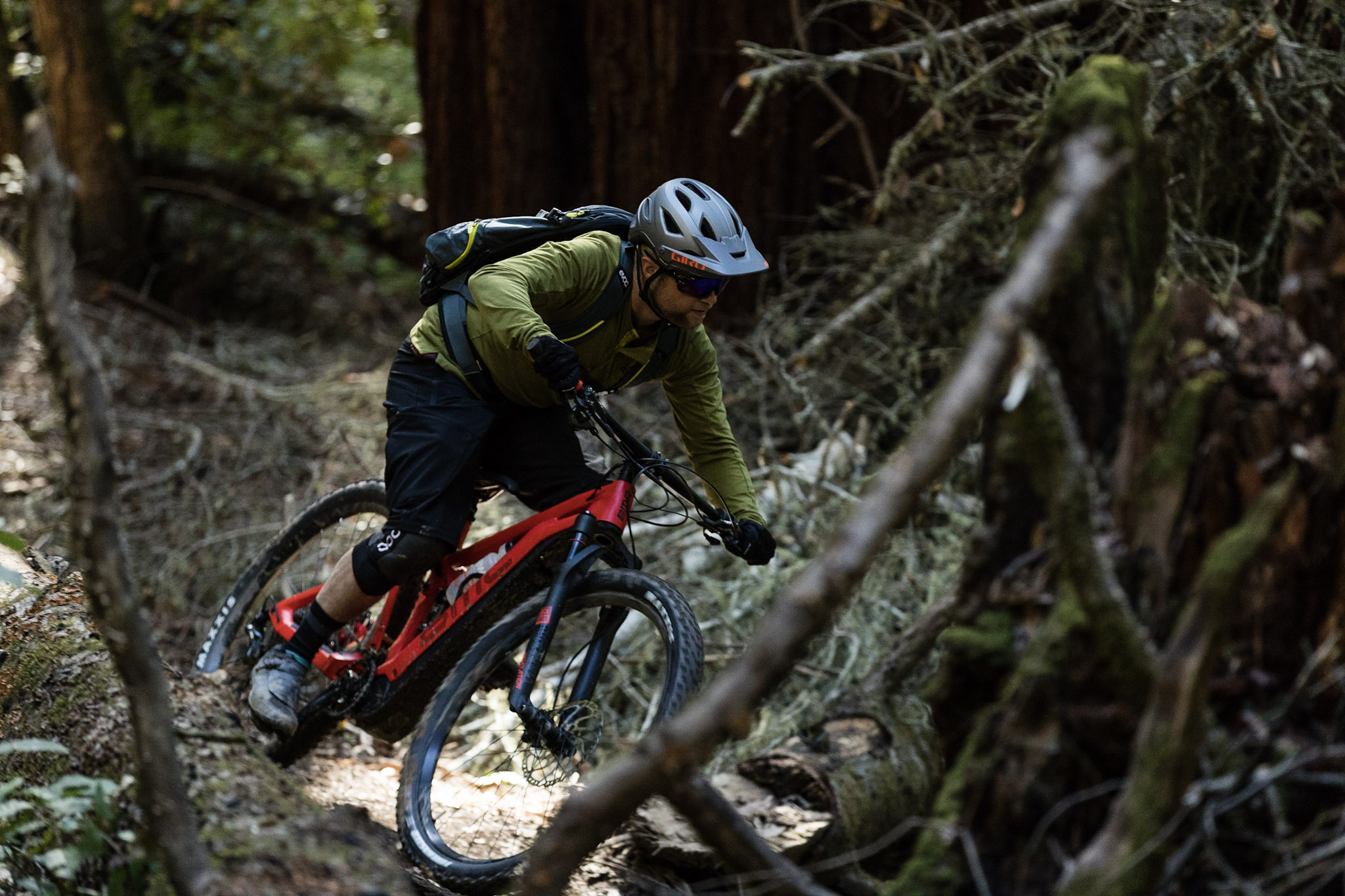 As for the Speedfox AMP it self, it seems to do everything well. It’s an e-bike, so it obviously goes up hill well. The suspension manages the power well while still keeping the bike light and fast over chunder and big roots. And overall, the geometry and handling is what you’d expect from a brand like BMC. If I have one gripe with the bike, it’s the location of the power switch and battery indicator which is on the bottom of the down tube which makes getting to it less than ideal when the bike is covered in mud/who knows what. However, I believe this was Shimano’s decision to locate it here, so BMC didn’t have much of a choice. It’s a small annoyance in the grand scheme of things on an otherwise awesome bike.

If you’re in the market for an e-MTB with 29″ wheels and shorter travel, you should definitely consider the Speedfox AMP.

Review: Killing it with silence on the Cake Kalk, now production...