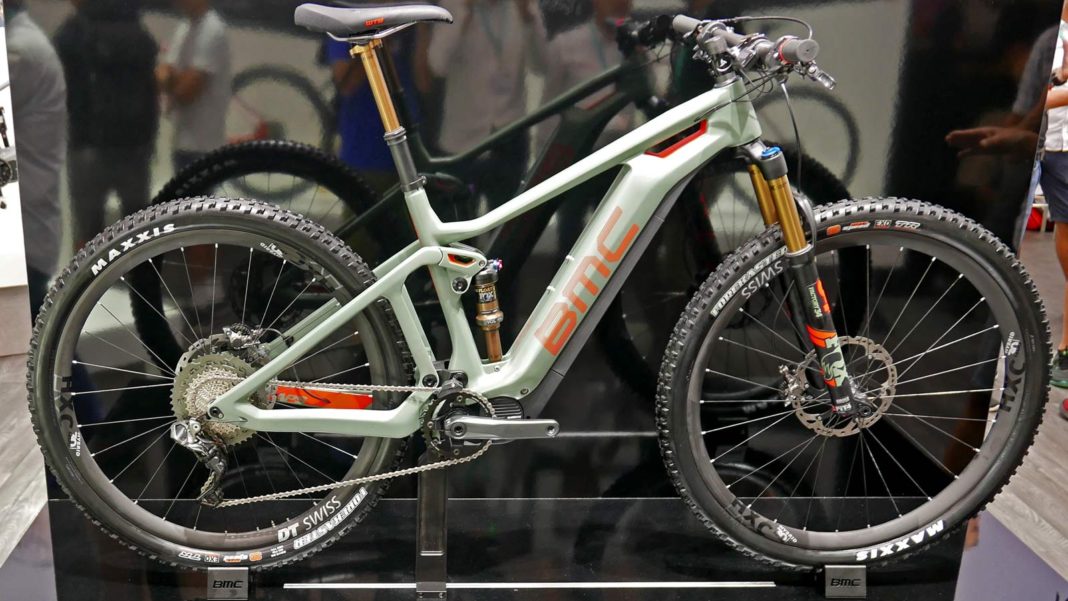 Earlier this summer BMC introduced a new Speedfox trail bike with an integrated dropper seatpost linked to a suspension remote. They even debuted a new 150mm travel Trailfox AMP eMTB for those looking to get a bit more serious off-road. Now they bring the two together in the new Speedfox AMP, a 29er e-bike to round out their collection for all around trail mountain biking. The new Speedfox AMP shares a lot with the Trailfox AMP, from the looks & styling of its full carbon frame to the actual structure of its unique double down tube that houses the power source and works with the Shimano E8000 drive motor. It even uses the same APS, shirt-link four bar suspension with a progressive spring rate for aggressive trail riding.

What’s different is that this bike dials back the travel to 130mm at both ends and sticks with the larger 29″ wheels. While each of the bikes in the family do include dropper seatpost, they don’t include the Trailsync shock/dropper integration like the standard Speedfox. That probably makes sense, as Trailsync is all about pedaling efficiency, something less critical on the e-bike version. But the clean look on the Trailsync equipped Speedfoxes is nice. That downtube setup is what BMC calls Twin Hollow-core, and is effectively two seperate carbon tubes joined on the inside of the front triangle and open to the bottom where the large battery squeezes in. The Speedfox AMP is available three models. Only the top-level Speedfox AMP LTD (top in olive) with XTR Di2 gets a full carbon setup. The Speedfox AMP One (middle in gray) with XT Di2 swaps in a one-piece aluminum rear triangle, as does the red Speedfox AMP Two (above in red) with mechanical XT.